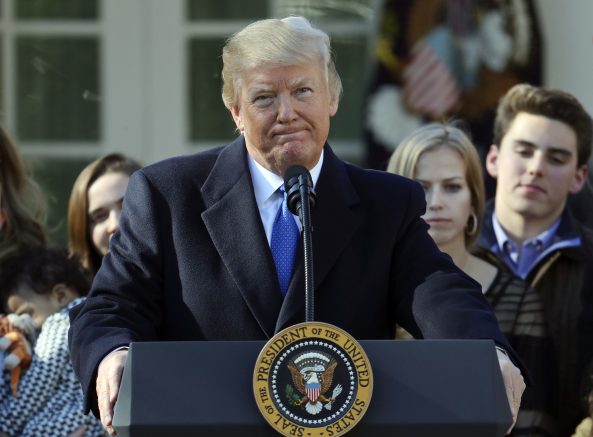 President Donald Trump described the March for Life as a “movement born out of love” during his address to pro-life advocates Friday in Washington, D.C.

Trump is the first sitting president to address the March for Life. He spoke to the crowd live from the Rose Garden, with Vice President Mike Pence and pro-life advocates gathered around him.

“You come from many backgrounds, many places but you come for one beautiful cause,” Trump said, praising the pro-life advocates gathered on the Mall. “You come to build a society where life is loved, protected and cherished. … You are a movement born out of love.”

“We know that life is the greatest miracle of all,” the president continued. “We see it in the eyes of every new mother who cradles that newborn child in her loving arms.”

Trump praised pro-life advocates for “working with tireless devotion” to provide parents with the support they need to choose life for their unborn babies.

He thanked the pregnancy centers and maternity homes across the United States that provide a “family” to pregnant moms and post-abortive women who are desperately seeking help.

Noting the 45th anniversary of Roe v. Wade, Trump lamented that the United States is one of only seven countries in the world that allows elective abortions after 20 weeks.

“As you all know, Roe vs. Wade has resulted in some of the most permissive abortion laws anywhere in the world,” Trump told the crowd.

“For example, in the United States, it’s one of only seven countries to allow elective late-term abortions, along with China, North Korea, and others,” the president said. “Right now in a number of states, the laws allow a baby to be born from his or her mother’s womb in the ninth month. It is wrong. It has to change.”

“I strongly supported the House of Representatives Pain-Capable bill, which would end painful, late-term abortions nationwide,” Trump said. “I call upon the Senate to pass this important law and send it to my desk for signing.”

Trump said his administration will continue to defend the first right in the Declaration of Independence, the right to life. He noted how, in his first year in office, he signed executive orders to prohibit taxpayer dollars to groups who promote and provide abortions overseas and to protect religious liberty. He also described a new proposal that will protect the conscience rights and religious freedom of doctors, nurses and other medical professionals who object to abortion.

“Under my administration, we will always defend the very first right in the Declaration of Independence and that is the right to life,” Trump said from the Rose Garden, flanked by March for Life participants.

The president surrounded himself with pro-life advocates who reach out to women and children daily. One was North Carolina maternity home leader Marianne Donadio, who experienced her own unplanned pregnancy at 17. Another was Pennsylvania student Chloe Kondrich, who has Down syndrome and has become an advocate for unborn babies and children with disabilities.

Trump described pro-life advocates as “special people” who give hope to thousands of women and their children.