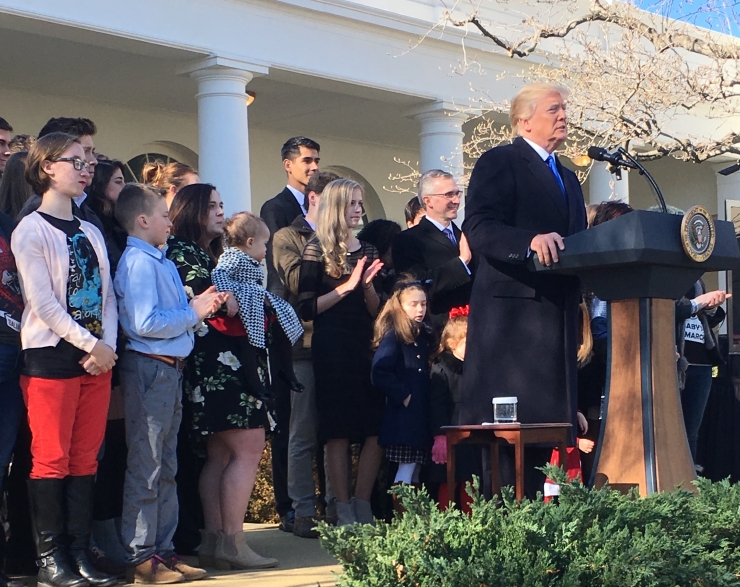 Five years ago—to be generous—would you believe that Donald J. Trump would not only serve as U.S. President, but would almost immediately make his mark as the most decisively pro-life president since Roe v. Wade legalized abortion in 1973?

As unlikely a scenario as that would’ve seemed, it’s pretty hard to deny after Friday, when Trump became the first-ever president to address the 45th annual March For Life—a gathering of hundreds of thousands of pro-life Americans in Washington, D.C.

But every bit as unlikely as Trump’s slew of pro-life policy wins and his comments Friday are the very lives of four women (plus their children) who joined him on stage at the White House Rose Garden.

All four women had faced an unexpected pregnancy, and all four had resisted pressure to abort their babies.

During his address, Trump introduced Marianne Donadio, who chose life during a surprise pregnancy and is now a mother of six and serving at Room at the Inn, a maternity home in Greensboro, North Carolina that has housed over 400 women.

“[Room at the Inn] has given them hope,” Trump said. “It has shown each woman that she is not forgotten, that she is not alone, and that she really now has a whole family of people who will help her succeed. That hope is the true gift of this incredible movement that brings us together today. It is the gift of friendship, the gift of mentorship, and the gift of encouragement, love and support.”

In addition to Donadio, three more women were standing on stage with Trump with similar stories to tell. Each had come to Washington, D.C. this week to tell lawmakers how pregnancy centers had made a difference in their lives at an annual event called “Babies Go to Congress,” hosted by pro-life pregnancy help network Heartbeat International.

Friday’s appearance at the White House was the capstone—albeit, a rather yuuuge capstone—to the week, especially considering the mothers brought along their children as part of the event.

As if finding out she was pregnant as a college student wasn’t enough of a stressor, Kelsey Hedges was in for the shock of her lifetime when she went to Pregnancy Resource Center of Rolla, Missouri, and found out through a free ultrasound that she was pregnant with twins.

An outstanding student and highly involved on campus, Kelsey initially ran into pressure from her twins’ father to abort. And she was close to doing so, researching Planned Parenthood’s abortion business in Columbia, near University of Missouri’s campus.

But Kelsey’s mind—and more importantly, heart—was made up the instant she first saw her daughters, Izabella and Brielle. Not only did she choose life for her baby girls, Kelsey went on to graduate on time with a bachelor’s degree, and has already begun a master’s degree in accounting.

“I was in love from the moment I laid eyes on both of them,” she said. “They are such a blessing in my life and bring so much joy to myself and the rest of my family. I thank God often for my girls and for PRC who saved me and my pregnancy.”

If irony is your cup of tea, you’ll want to make sure you’ve got a kettle on the stove for Nadya Boyer’s story—especially considering then-Candidate Trump’s approving remarks about Planned Parenthood during the 2016 campaign.

Nadya had been raised in an Evangelical Christian home, but first turned to Planned Parenthood to escape her unexpected pregnancy. Though she’d convinced herself she had no other choice but abortion, a previous visit to a pro-life pregnancy help center, Elizabeth’s New Life Center in Lebanon, Ohio, had given Nadya the chance to process much of the inner turmoil she was going through.

Still processing that conversation, Nadya was sitting in Planned Parenthood’s waiting room, ready for her name to be called when she suddenly found the strength to choose life for her son, Charlie.

Now married to Charlie’s father, Nadya walked out of Planned Parenthood and went directly to Elizabeth’s New Life Center, which helped her prepare for motherhood and continue on with her education.

“It was not the end of the world,” Nadya said of her unexpected pregnancy. “If anything, I’m so much better off today.”

“They showed us the love of Christ.”

Six years ago, Paula Garner was a 17-year-old staring down at a handful of positive pregnancy tests in her high school bathroom. She knew she was pregnant, but just couldn’t bring herself to believe the reality in front of her.

In the words of the 2018 March for Life tagline, Paula found firsthand that, “Love saves lives.”

Today, Paula and her husband, Chris, are proud parents of two daughters, Skylar and Audrey. With the goal of working at as a pregnancy center counselor, Paula is midway through a psychology degree thanks to a scholarship awarded by Care Net—like Heartbeat International, a network of pregnancy centers.

“They showed us the love of Christ at a time when we felt so far from God and his plan for our lives,” Paula said. “Sometimes I sit back and think that without my daughter, and without being directed to Hand of Hope, I wouldn’t be where I am today. I wouldn’t be the person that I am today, and I don’t even know if God would have been able to get a hold of my heart the way he has.

“Before my daughter was born, I was headed down a very bad path in life, but her life has given me new life in Christ. It changed the entire direction that my life was headed in and for that I could not be more thankful.”

While President Trump’s evolution from default-abortion supporter to ardent pro-life defender may seem impossible to believe—indeed, too unlikely for many to admit even now—it’s backed up by concrete action.

In his address, Trump gave a nod to his administration’s reversal of an Obama-era rule forcing states to fund Planned Parenthood, as well as Thursday’s rollout of a new department meant to protect the rights of medical professionals not to perform or participate in abortions.

Recent state laws in Illinois and California are meant to do just that—with the California law headed for the U.S. Supreme Court on grounds it violates the First Amendment by forcing pro-life pregnancy centers to advertise taxpayer-funded abortions.

“We are protecting the sanctity of life and the family as the foundation of our society,” Trump said. “But this movement can only succeed with the heart and the soul and the prayer of the people.”