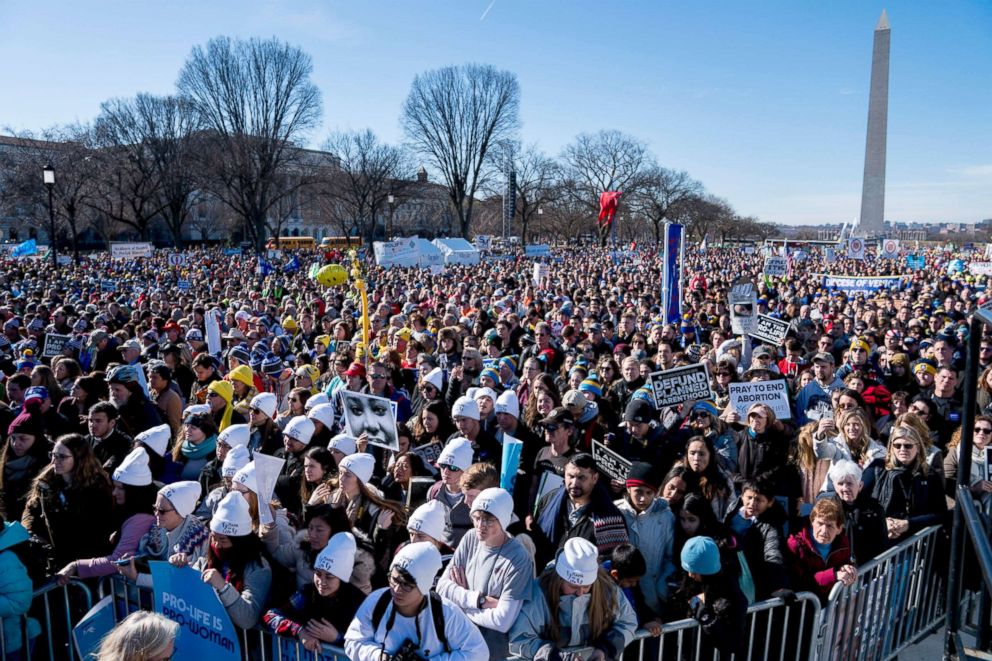 The 2018 March for Life was full of enthusiasm Friday as hundreds of thousands of pro-life advocates gathered in the capital to celebrate the value of human life and the victories for life that have been achieved.

Kicking off the event, March for Life President Jeanne Mancini told the crowd that they were participating in the largest human rights demonstration in the world.

“We have persevered to become the largest annual human rights demonstration in the world,” Mancini said. “Your love is saving lives!”

The march began 44 years ago on the anniversary of the U.S. Supreme Court ruling Roe v. Wade. The decision legalized abortion on demand in all 50 states and made America one of only seven countries in the world that allows elective abortions after 20 weeks.

“Since [1973], abortion has claimed the lives of over 60 million Americans, and we grieve their loss,” Mancini said.

She went on to praise the dedication of pro-lifers who have worked for four decades and continue to work to protect babies from abortion. As a result, abortions are at a 40-year low and abortion facilities are closing at a rapid pace.

Joining her in praise were President Donald Trump and Vice President Mike Pence, the first sitting president and vice president to address the march live, along with numerous U.S. Senators and Representatives, and pro-life leaders.

U.S. House Speaker Paul Ryan marveled at the number of young people in the crowd and spoke of the hope that they give him.

“It tells us this is a movement that is on the rise,” Paul said, noting their “infectious” energy.

“And you know one thing that gets lost in this controversy is how compassionate the pro-life movement really is,” he continued. “How much this movement helps women – women who have been through the pain of abortion. … I’m so proud of how this movement provides resources to mothers through thousands of pregnancy centers. This is true compassion. This is real love.”

Speakers encouraged the pro-life advocates to keep up their enthusiasm throughout the year. Many people used the hashtag #whywemarch on social media to explain why they fight for the rights of unborn babies.

I’ve lost two children to miscarriage. And the thing that feels unimaginable to me is that someone took the worst experience of my life and distilled it into a pill to give to women. And that for so many women it feels like the responsible choice.#WhyWeMarch

This is my daughter, she was born at 28 weeks.
There are people who support aborting babies her size or even bigger.
She fought to live for 63 days in the NICU, before finally coming home.
Today she is almost 13, and ABSOLUTELY amazing.#WhyWeMarch#MarchforLife#Stand4Life pic.twitter.com/SNSNrEVoat

So much energy and enthusiasm from kind pro-life young men and women this sunny Friday! #MarchforLife #prolife #prolifegen #LoveSavesLives pic.twitter.com/5zeMYLLzFX

I’m here speaking for those who can’t! I drove 11 hours to get here from New Hampshire, and I’m proud to say I am the Pro-Life Generation. #Marchforlife #Whywemarch #MarchForLife2018 pic.twitter.com/Fg4Yyffe6a

Now is our time to end the legal killing of preborn babies! #marchforlife #whywemarch pic.twitter.com/Pvxf8kx93L