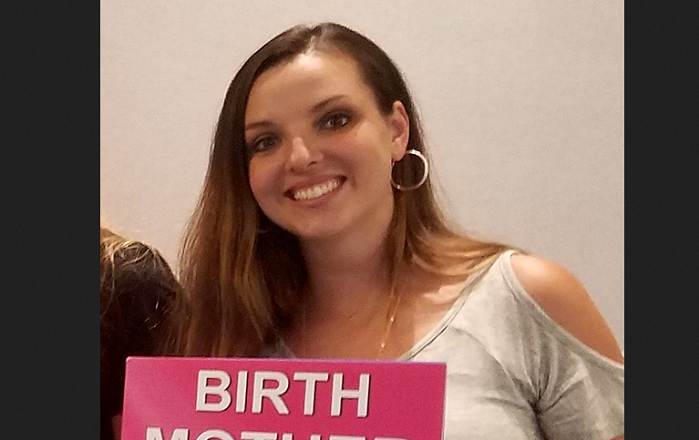 My story begins when I was 19 years old, living in Cincinnati, Ohio. I was a brand new Christian, church-going, ecstatic, blissful young woman, working at IHOP as a waitress. Oftentimes, I had to work late shifts and take the bus home after midnight. One night, on my way walking home from the bus stop, I met a man who seemed nice enough.

We began texting for a few weeks, then he asked me if we could hang out at my apartment. I wasn’t attracted to him. I didn’t want to be with him, but I never wanted to hurt people’s feelings and I was so naive back then, thinking that he just wanted to hang out and be friends. For years, I struggled with the shame that I had let this man into my home without truly knowing him. Since then, I’ve learned how to forgive myself and how to be more cautious in my associations and decision-marking.

He was in a reclining chair in my family room and pulled out a gun that I believe he said was a Glock 42 and set it on the table right next to him at arm’s length. I was sure it was loaded. In that moment, I was terrified. I froze.

For years, I struggled with questions I’d ask myself: “Why didn’t I grab the gun?” But then I think, I had never handled a gun, or even knew how to take the safety off. What if he grabbed it back and shot me?

In the moment, I had all these thoughts of how to get away — me screaming in my head, “Run! Run!” But in the physical, the fear that had taken over my body, seemed to take any muscular strength with it. I heard stories of women being raped before and I had always said what I would have done. And then, that all changed. I never predicted that I would ever be in this situation. I felt like it would never end. I felt like a little girl with all power stripped away. Time stood still, noises faded out.

When he left, I ran and locked the door. I slid to the floor, sat in complete shock, my heart aching, and tears endlessly flowing. I was a virgin planning to save myself for marriage. My whole world was shattered.

The only person I reached out to was my best friend. I called about 30 minutes after the rape and just sobbed and sobbed, telling her something bad had just happened. I couldn’t even explain it right away.

The following weeks were hardly bearable, but I did my best to carry on without any attention being brought on me. All I wanted was to move on, and act like that was all a terrible nightmare. Although on the outside I smiled, laughed, and acted normal, on the inside I was dealing with hidden pain. I was angry. I was hurting. I blamed myself. I blamed God. I no longer saw value in my life. I was utterly broken. I didn’t tell a single soul. I didn’t want anyone to know. I had a constant mental battle, causing me to lose sleep, and although I tried everything to set my mind on other things, my thoughts seemed to never let me rest.

I began to get sick, and grew sicker by each day. I thought it was just stress or that I had come down with something. Though, after six weeks of this unrelenting sickness, I finally went to a doctor. She asked what my symptoms were and then immediately asked if it was possible that I was pregnant. I was in such denial, that I told her that I was a virgin. When the test came out positive, I finally broke my silence and told the doctor about the rape.

The world suddenly got very silent. Walking out of the office was the slowest I’ve ever walked. I saw so many pregnant women around me, but it seemed too far-fetched to have happened to me.

Countless tears accompanied the many emotions running through my heart. I looked down at my stomach and I put my hand across my abdomen. There was a six-week old baby in there somewhere.

Soon after, I told my mom. She was heartbroken for me, but never left my side.

Over the next few months, my attitude and heart began to change. I started to trust God and believe there was a purpose to this whole circumstance. Prior to all of this, my walk with Christ was very surface-level. Amazingly, during this time in my life is where my relationship with Christ grew to a deeper level than I had never known.

This baby actually gave me hope — a reason to live and march forward. There was life within me, but the reality was, this baby gave me life.

I had actually always had a stance of believing abortion was morally wrong, but it wasn’t necessarily a strong stance. I had a few people very close to me telling me that they would “understand” if I chose to abort, and they even offered to help to obtain an abortion.

Yes, I was in a vulnerable place, but despite my feelings, my heart stood strong on the conviction: How can it be justified to take this baby’s life because of the tragic act done by a man who knew what he was doing? The rapist was culpable. This baby was innocent.

I would oftentimes hold my growing stomach and think, “I can’t feel you, see you and I don’t even know if you are a boy or girl at this point, but I feel compelled to protect you. It’s my duty and my duty alone, no matter what.”

Whether a baby is conceived consensually or through incest or rape, it’s an innocent life. Through my journey I came to the conclusion that a life is a life no matter what stage.

I chose open adoption for my daughter after much prayer and thought. I wanted a stable home for her and a dedicated father. This was the hardest decision I’ve ever made, but I put her needs before my desire. I placed her with a beautiful family, and we have since grown into one huge family for our daughter. I gave birth to my sweet girl, and when I laid eyes on her, all I could think was how beautiful she was. I never thought she was a mistake or tragedy. I was able to give my daughter physical life, while God used her to bring me into a true and deep relationship with Christ where I could fully rely upon and trust Him, no matter what comes my way.

Today, I am married to an incredible man who adores my first daughter, while we are raising two daughters and one son together. I speak internationally to schools, churches and other interested groups about adoption, pro-life issues, self-esteem and related topics. I facilitate an online birth mother support group, fight for the 1% of babies targeted for abortion due to rape or incest, and I embrace the women who lack support and are scared just like I was.

The lives of those babies who are recklessly justified to be ended, deserve a chance. And so does the woman who thinks there is no hope. Grasp her hand, walk through this rough journey with her, and believe in her ability to overcome the rape, while nurturing life.

“You (Satan) intended to harm me, but God intended it for good to accomplish what is now being done, the saving of many lives.” — Genesis 50:20

LifeNews Note: Jerusha Klayman-Kingery is wife, mother of three, and birth mother to one. She’s also a part-time missionary, singer-songwriter, pro-life activist and pro-life speaker and blogger for Save The 1.  As President and Founder of As His Miracle Grows, she and her husband speak to youth and do missions.   Follow her on her Facebook page:  Jerusha Klayman-Kingery Pro-Life Speaker