It’s a curious thing. At times, the most brilliant scientists and mathematicians throughout history have held some of the most preposterous beliefs.

For instance, Rene Descartes, inventor of modern analytic geometry and the Cartesian plane, believed the pineal gland was the seat of the human soul. Sir Isaac Newton, the father of classical mechanics, the laws of motion, and co-discoverer of calculus, believed that one could predict the future through hidden secrets written into the Bible. And William Herschel, who discovered the planet Uranus, believed that, based on “astronomical principles” [italics in the original text], the Sun had a solid surface with “mountains and vallies [sic]” and was “most probably also inhabited” by alien life.

Even Albert Einstein for years refused to believe—contrary to all observational evidence—in an expanding universe. Einstein initially rejected the theory of an expanding universe proposed by Fr. Georges Lemaître, former President of the Pontifical Academy of Sciences, a Jesuit priest, and one of the leading astrophysicists of the mid-20th Century. Lemaître’s theory became what is now known as the Big Bang Theory.

Now world-renowned physicist Stephen Hawking has claimed that overpopulation and an excessive consumption of energy will turn Earth into a “ball of fire” by 2600, according to Metro.

Hawking made the eyebrow raising claim in a video address delivered at the Tencent WE Summit in Beijing recently.

Hawking’s “ball of fire” statement prefaced an appeal to the scientific community to support ‘Breakthrough Starshot,’ a venture to launch a nano-spacecraft capable to reaching Alpha Centauri, our nearest neighboring star system, in about 20 years.

Hawking hopes that such a mission could reveal potentially habitable planets for future generations. Hawking made the case that humanity must “boldly go where no one has gone before” in order for humanity to continue for another million years.

While it may be important for humanity to find other nearby habitable planets as possible ‘plan Bs’ in the event of a worldwide catastrophe, population growth and energy consumption are certainly not projected to turn Earth into a “ball of fire.”

In fact, world population is projected to slow over the course of the remainder of this century. The annual population growth rate has plummeted since the 1960’s with no signs of reversing any time soon. 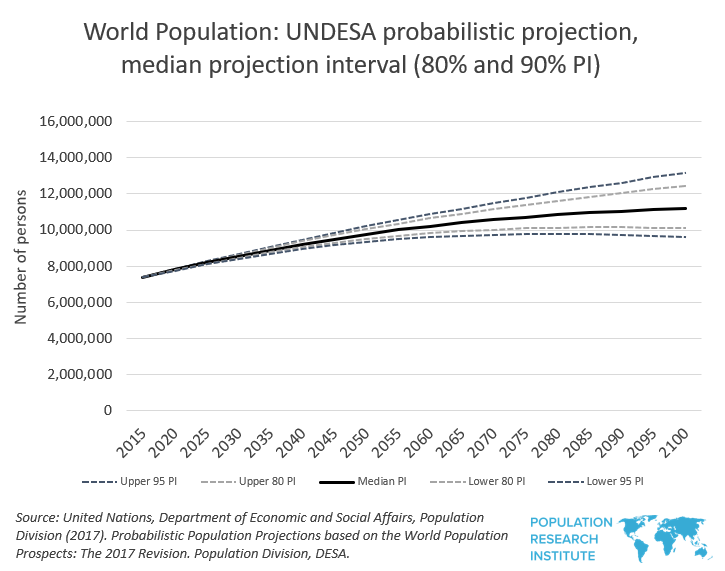 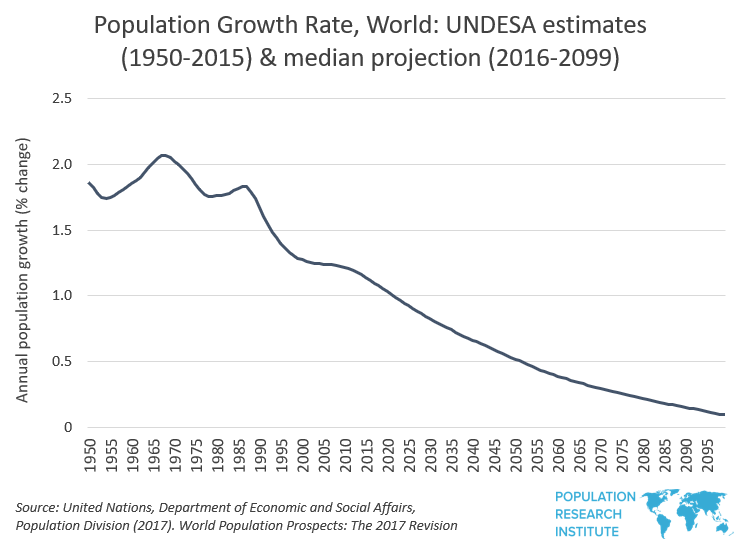 As the 20th and early 21st centuries have shown, couples have down-revised desired fertility as child mortality decreases and health care improves. Couples are now having fewer children as the likelihood that their children will survive to adulthood increases.

Other factors such as increasing urbanization, greater participation in the workforce and higher educational attainment among women, and the rising standard of living worldwide appear poised to slow population growth further for the foreseeable future.

Moderate population growth is a crucial factor for healthy economic growth and for population replacement.

In fact, while 2 billion persons have been added to the world population since 1990,[1] the percentage of undernourished persons in developing countries has fallen from 23% down to 13%.[2] And in 2014 we produced food on less land than the amount of land under agricultural use in 1994.[3]

It is uncertain how population growth over the coming centuries will in and of itself cause the Earth to combust. To be charitable, perhaps Hawking’s “ball of fire” statement was merely metaphorical hyperbole. Even so, it was probably not the best choice of words.

Let’s stick to the facts. World population is slowing, not exploding.  But in any event, there is no evidence to support the claim that population growth per se will cause the Earth to become a flaming inferno.