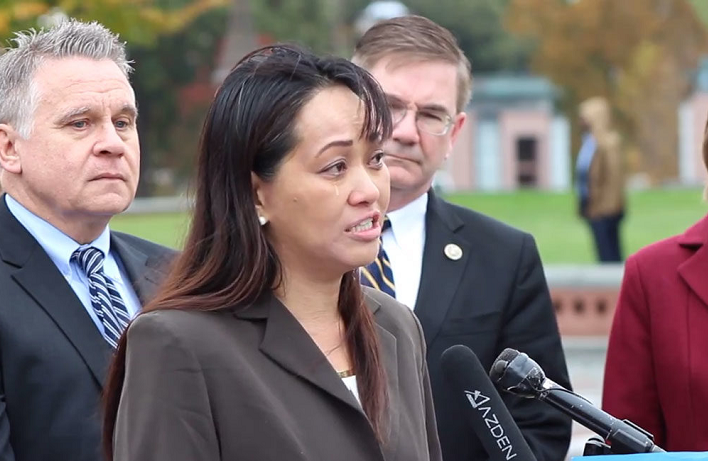 Pro-life members of Congress have introduced legislation to protect health care providers from being compelled to provide abortions under threat of losing their jobs.

Rep. Chris Smith, R-N.J., held a press conference on the House Triangle outside the U.S. Capitol on Wednesday to promote the Conscience Protection Act. The bill is designed to “end discrimination against people, [insurance] plans and providers for choosing not to be involved in abortion,” according to a statement from Smith.

“Health care, my friends, is about saving lives,” Smith said. “It is about eradicating disease. It’s about mitigating disabilities, not taking the lives of unborn children. At the very least, health care providers should have the right not to be coerced into facilitating abortion.”

Since the 1970s, it has been illegal for public authorities to force individuals or entities to perform or assist in the abortion process. But Smith said the law isn’t enforced, and people like the three nurses who joined Smith at the press event had their livelihoods threatened for seeking to avoid performing abortions.

“My faith in God and the Catholic Church’s teachings about the sanctity of all human life further inspired my career in nursing,” said Cathy DeCarlo, one of the three nurses.

DeCarlo said she moved from the Philippines to the U.S. to expand her opportunities in the medical field. In 2004, she served as an operating-room nurse at a New York hospital. For five years, her bosses assured her that she wouldn’t be compelled to assist in or perform abortions.

But that changed in May 2009, when she was ordered to perform an abortion on a 22-week-old unborn child. Despite pleading with her supervisor, she was told she either needed to comply or be charged with insubordination and abandoning her patient.

“[I] watched in horror as the doctor dismembered and removed the baby’s bloody limbs,” said DeCarlo, trying to hold back tears. “And I had to account for all the pieces. I still have nightmares about that day.”

The two other nurses, Sandra Mendoza and Fe Vinoya, faced similar threats to their careers if they didn’t comply with their facilities’ new requirements; namely, to assist in taking the lives of unborn babies.

Smith said the legislation will provide “a right of private action, so they can take those … rights of conscience into a court of law” and win their cases.

“Being American has always been experiencing the freedom to live by the dictates of one’s deeply held beliefs,” said Rep. Diane Black, R-Tenn., who was one of the authors of the Conscience Protection Act.

“We are not seeking to change anyone’s minds on abortion,” she said, “though I would hope one day they could. We are simply asking to protect the fundamental rights of Americans. No one, ever, should be forced to participate in killing an unborn child.”

Sen. James Lankford, R-Okla., who co-wrote the Conscience Protection Act with Black, was also on hand for the bill’s rollout.

“Federal funds do not extend to forcing or compelling individuals to participate in abortion,” Lankford said. “That’s already settled law.”

Lending bipartisan support, Rep. Dan Lipinski, D-Ill., defended his fellow congressmen and their statements about people’s rights to live by their beliefs.

“If we cannot uphold these freedoms,” he said, “[then] this is really a great detriment to our nation. We have to live up to our principles.”