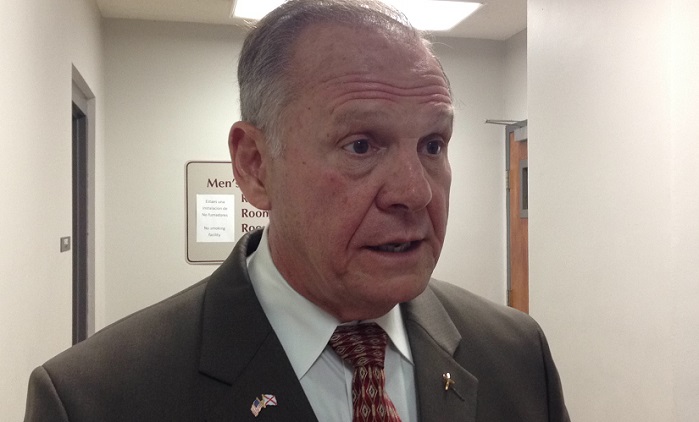 Strange was appointed to replace then-Sen. Jeff Sessions, who is now the United States Attorney General.

Even though Senator strange had the endorsement of President Donald Trump, pro-life Republicans are upset that the Senate continues to be unable to pass legislation to both repeal Obamacare as well as defund Planned Parenthood abortion business. Ironically, Senator Strange supported both Obamacare repeal as well as defunding the abortion company.

However, with the Senate pulling the latest Bill to defund Planned Parenthood yesterday, many pro-life Republican voters are looking for somebody to blame and Strange’s election came at just the wrong time for him to be able to be nominated for the Republican spot to face a Democrat in November.

Judge Moore is a longtime pro-life advocate. Under his leadership, the Alabama Supreme Court held that the word “child” in Alabama’s chemical-endangerment statute applies to the born and unborn.

The Alabama Supreme Court ruled that “the plain meaning of the word ‘child,’ as that word is used in the chemical-endangerment statute, includes an unborn child.” The opinion goes on to state that “the State has a legitimate interest in protecting the life of children from the earliest stages of their development and has done so by enacting the chemical-endangerment statute.”

The concurring opinions by Chief Justice Roy Moore and Justice Tom Parker are particularly significant because they reveal the flaws in the U.S. Supreme Court’s abortion decisions, beginning with the 1973 case of Roe. v. Wade. Excerpts of their concurring opinions are set forth below:

“Denominated in the United States Code as one of the ‘Organic Laws of the United States of America,’ the Declaration acknowledges as ‘self-evident’ the truth that all human beings are endowed with inherent dignity and the right to life as a direct result of having been created by God.”

“God, not governments and legislatures, gives persons these inherent natural rights . . . Government, in fact, has no power to abridge or destroy natural rights God directly besets to mankind and indeed no power to contravene what God declares right or wrong.”

“As the gift of God, this right to life is not subject to violation by another’s unilateral choice.” “From local to international, all law flows from the divine source: it is the law of God. The law of nature and of nature’s God binds all nations, states, and all government officials—from Great Britain to Germany to Alabama—regardless of positive laws or orders to the contrary.”

“States have an affirmative duty to protect unborn human life under the Equal Protection Clause of the Fourteenth Amendment.”

“Any state’s discriminatory failure to provide legal protection equally to born and unborn persons under, for instance, its statutes prohibiting homicide, assault, or chemical endangerment violates, therefore, the Equal Protection Clause of the United States Constitution.”

“Because a human life with a full genetic endowment comes into existence at the moment of conception, the self-evident truth that all men are created equal and are endowed by their Creator with certain unalienable rights encompasses the moment of conception. Legal recognition of the unborn as members of the human family derives ultimately from the laws of nature and nature’s God, who created human life in His image and protected it with the commandment: ‘Thou shall not kill.’”