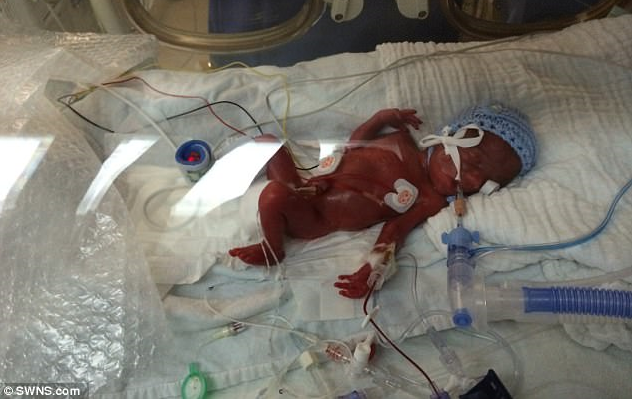 Despite their hard work and innovation for the twins, doctors said Ruby and Sapphire Wirt almost certainly would not survive. But they kept trying and saved both of them. Today, the girls are toddlers who are enjoying life at home with their mom and dad.

The Daily Mail reports Caroline Wirt’s water broke on Jan. 4, 2015 when she was 23 weeks pregnant with her twin daughters. Doctors at Royal Sussex County Hospital tried to delay labor, but Wirt developed sepsis after several days in the hospital, according to the report.

Wirt said both she and her unborn girls could have died from infection, so doctors decided to perform an emergency cesarean section. Her daughters were born exactly on the 24 week mark, with Sapphire weighing 1 pound 2 ounces and Ruby weighing 1 pound 5 ounces.

“I had them bang on the day I turned 24 weeks pregnant, which meant the hospital staff were able to intervene and help them breathe,” said the East Grinsted mom.

“Any earlier and the chances were the doctors would not have been able to help them because that’s what the law says, and we would have lost them. But they were just the right side of the time limit and because they were breathing, they were able to step straight in and ventilate them.”

In England, babies born weighing less than 1 pound or before the 24 week mark often are left to die because doctors say they are not viable. However, some babies have survived earlier and smaller, and many parents of premature infants now are petitioning the British government to support treatment for babies born smaller and earlier. Wirt and her husband, Andy, were grateful that their daughters reached the 24-week mark; but doctors still told them that the chance of both twins surviving was very unlikely.

The medical team used bubble wrap blankets to keep the twins warm and monitored them constantly, according to the report.

Wirt was well enough to go home five days later, but her twin girls spent several months in the hospital. The girls struggled to survive. First, Sapphire contracted necrotizing enterocolitis, a disease of the intestines, and needed a high risk surgery. Then, Ruby developed the same disease several days later.

The twins pulled through the disease and surgeries, only to face more medical problems. According to the report, Ruby had to have surgery to fix a hole in her heart when she was six weeks old, and later to fix a tear in her intestine. Then Sapphire had laser eye surgery in both eyes.

On June 17, the sisters were well enough to go home. Their parents credited their unique bond as twins as the reason for their survival.

“… they’ve overcome everything in their way which I’m sure is down to their unique bond,” their mother said. “They’ve been together through everything and given each other the strength to survive.”

Wirt continued: “For one of them to pull through everything is one thing but to have both of them standing here is a complete miracle. We’ve been through so much and it’s so wonderful to see them as happy healthy little girls.”