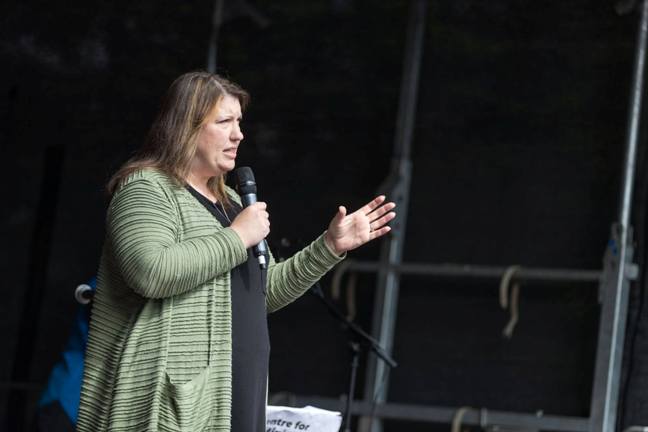 Catherine Adair describes her former self as “the most pro-choice feminist activist you’ve ever met”. But, as she explained to the crowds gathered at the end of last month’s March for Life, this was a reaction to the devastating impact of the abortion she was pressured into having when she was 19 years old.

The effort to suppress the lasting emotional damage of ending the life of her child led her not only to become a pro-choice activist, but to start working for a Planned Parenthood clinic in New England. There she witnessed thousands of abortions, and joked with colleagues while collating “pieces of children” after procedures. It wasn’t until being told to clear up a room after a second trimester abortion that the reality her clinic was killing children hit her and she left her job.

You do not speak for me

Catherine’s testimony seemed particularly relevant, as earlier in the day, pro-choice activists had done their best to disrupt the March, including storming the stage and throwing smoke bombs. As she explained, the people who work in clinics are not bad people and she for one really believed Planned Parenthood’s lies that abortion is necessary for women’s health. However, pro-choice activists must not get away with the claim that they represent the views of all women. “Those people who claim to speak for women, you do not speak for me. You don’t speak for thousands of women like me, pressured, coerced, forced into abortion, who have a lifetime of regret.”

The reality of “pro-choice”

Her experience of working in an abortion clinic also made her the perfect person to address those who call themselves “pro-choice” (though not many had stayed to hear her!). As she said “it’s very easy to be pro-choice when you don’t have to see the results of that choice”.

“If you saw what I saw, if you knew what I knew, if you smelt the smell of an abortion clinic, you would, never, ever, call yourself pro-choice again.”