Proving yet again that babies are so much more than just an inanimate clump of cells, a preemie in India beat the odds this week to become the smallest infant to ever survive heart surgery.

According to this, the still-yet-to-be-named baby boy was born at just 28 weeks in Udaipur, weighing in at just over a pound. His skin was too fragile to even touch, which made him more difficult to treat.

Unfortunately, being an underdeveloped preemie wasn’t this little boy’s only obstacle – he was also born with Patent Ductus Arteriosus, a heart condition that made it difficult for him to breathe. So, at just two weeks old, doctors were forced to perform a difficult and dangerous operation to correct the problem. They had to use specialized miniature equipment, given that the baby was only about the size of a palm.

Despite the odds stacked against him, the little warrior prevailed.

His father, known just as S P Jain, says his son’s survival is nothing short of a miracle.

He said: ‘He is so brave that he has survived so many odds with such low weight. Our prayers have been answered.’

Check out this amazing photo of doctors operating on the tiny little one: 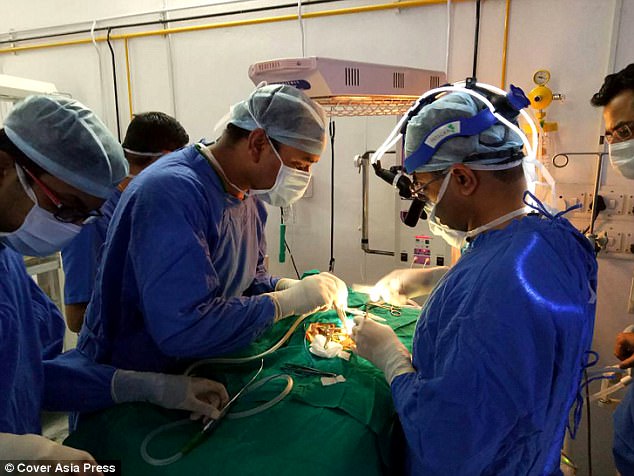 At just 28 weeks gestation, this little fighter was born on the edge between the second and third trimesters, when abortions on demand are legal across much of the United States. In fact, it is legal in the United States to electively abort an unborn child until birth, which normally takes place about 11 weeks beyond the age this little boy was born.

Only 17 states restrict abortions after 20 weeks. While most states place restrictions on abortions in the third trimester, when a baby is largely considered viable, seven states allow abortions on demand until birth for any reason, according to the pro-abortion Guttmacher Institute.

According to the CDC, roughly 13,000 children just like this little boy are killed every year in late-term abortions.