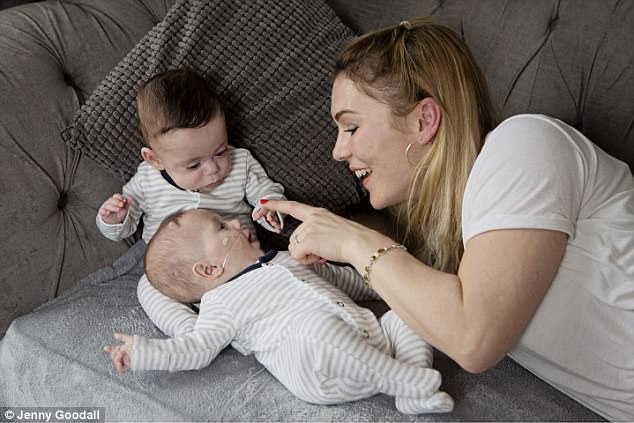 A British family is celebrating this spring because their twins who were born weighing a little more than 1 pound are finally home from the hospital.

Jo-Anne Collins and her partner, Paul Paraskeva, of Bristol, England told the Daily Mail that they struggled for 12 years to conceive a child. Then, last year, after several attempts with in vitro fertilization, Collins said she became pregnant with twin boys Frankie and Nico.

But their struggles were not over.

Collins said she was stuck in traffic one day, more than 100 miles from home, when she began to go into labor. She was just 24 weeks pregnant at the time. But by luck or miracle, she happened to be very close to a hospital that specializes in neo-natal care, according to the report.

There she gave birth to her twin boys on Sept. 25, both weighing 1 pound, 5 ounces, the report states.

“They put Nico on my tummy after I gave birth to him and he was the smallest thing I’d seen in my entire life,” she remembered. “He looked like a little guinea pig and he was transparent. And their eyes were fused shut for the first three weeks of their lives.”

The family’s struggles continued. Both boys spent several months in the hospital, but Nico had the most problems. According to the report, his heart stopped once and medical staff had to perform CPR. Nico also had two brain surgeries for hydrocephalus, or fluid build-up on the brain. Frankie and Nico both had to have eye surgery as well, the report states.

The twins fought through the obstacles; and this spring, they finally are home together with their parents. Frankie now weighs 10 pounds and Nico weighs close to 9 pounds, according to the report.

“To have the two boys home together is a miracle,” Collins said. “I cried my first happy tears when we were together as a family for the first time.”

The boys were born after an estimated 24 weeks, 2 days of pregnancy — just a few short days after what doctors generally consider to be the point of viability. Many British hospitals will refuse to treat a baby born before the 24 week mark because they argue that the baby is unlikely to survive. The 24-week also mark is significant because it is the point when most abortions are illegal in the UK.

However, a growing body of research indicates more babies are surviving outside the womb before 24 weeks.

Earlier this year, a study out of Duke University found that more babies are surviving at 23 weeks. The researchers found a “small but significant drop in fatalities for babies born between 23 and 37 weeks gestation,” as well as a decrease in premature babies manifesting with neurophysiological problems, the Daily Mail reported.

In April, researchers published a new study about artificial wombs, which could help more very premature babies to survive in the future. The scientists said the artificial wombs helped premature animal babies to develop normally; they were about the equivalent age of a human baby between 22 weeks and 23 weeks.