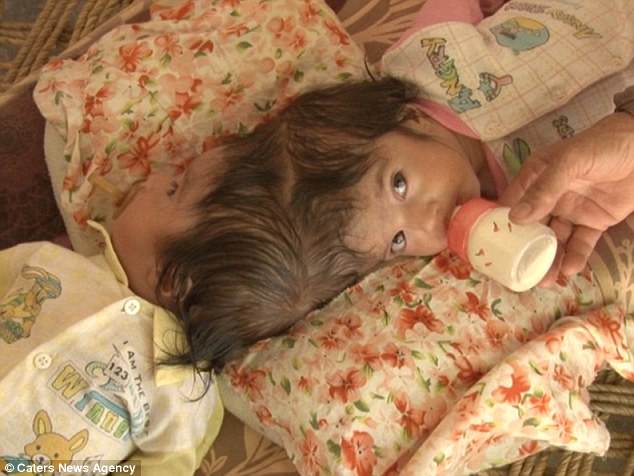 A struggling Pakistani widow is praying for another miracle for her twin daughters who are conjoined at the head.

The Daily Mail reports conjoined twins Safa and Marva beat the odds and survived birth in January, but their future remains uncertain.

The girls are craniopagus twins, an extremely rare condition where babies are joined at the head. Many craniopagus twins are stillborn, and still more die soon after birth, according to the report.

Safa and Marva are unique because they have separate brains. Doctors said they could be separated, but the surgery is very complicated, the report states.

Their mother, Zainab Bibi, gave birth to the girls in January in Peshawar, Pakistan; she was widowed just 10 days before they were born, according to the report. A stay-at-home mother to seven children, her family said she is struggling even more as a result of the twins’ situation.

“We are worried for the future of the family now,” said Muhammad Sadaqat, the twins’ uncle. “We are praying for God to show mercy and make a miracle happen.

“We don’t know what to do. The doctors first said they will go for the surgery but now they are telling us this is going to be difficult. We dearly love the twin girls and we want them to be a hope for their mother,” he added.

The family said they are taking it one step at a time and focusing on the twins’ needs. They said they continue to pray and remain hopeful that doctors will be able to separate the twins.

LifeNews has written about similar situations in the past. In some cases, parents of conjoined twins were encouraged to abort them. Doctors argued that the twins probably would die anyway or would not have a good quality of life.

But stories like Tatiana and Krista Hogan’s demonstrate why conjoined twins, like every baby, deserve a chance at life. Conjoined at the head, the twins cannot be separated because Krista is partially dependent upon Tatiana’s heart for adequate blood supply. However, the girls have enjoyed good health, reaching their developmental milestones on schedule.

Twins Carl and Clarence Aguirre are another example. They were born conjoined at the head, but more than 10 years ago, doctors performed a series of complex surgeries to separate them. In 2014, the New York Times profiled the family as they celebrated 10 years since the twins’ separation.