(LiveActionNews) — Technology has come a long way since the legalization of abortion over 40 years ago. In the 1970s, the average pregnant woman didn’t know what her preborn child looked like at each stage of development. Then ultrasounds became standard practice, and as that technology improved, so did our ability to see inside the womb. Today, it is glaringly obvious that fetuses are 100% human, 100% alive, and 100% worthy of the same rights as those of us who have had the privilege of being born. A video of twins inside the womb proves that life begins before birth.

The video, shared by the Twins and Multiple Births Association (Tamba), was filmed at 22 weeks gestation back in 2014. Sarah and Dan Maund were at London’s St. George’s Hospital for a laser ablation surgery on their identical twins who had Twin to Twin Transfusion Syndrome (TTTS).

TTTS occurs in approximately 10 to 15 percent of identical twin pregnancies when the blood from the placenta is not distributed equally to each child. Blood goes from one twin called the “donor” to the other called the “recipient” and results in the donor twin being smaller and less healthy due to the smaller blood supply. The recipient twin, meanwhile, can also suffer and go into cardiac failure because of his blood supply being too high. If left untreated, 90 percent of babies will die. 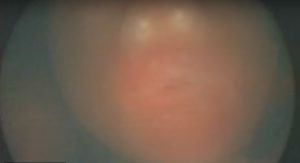 The tiny face of one one of the twins can be seen in this screenshot of the video.

Dr. Basky Thilaganathan performed the surgery and caught ten minutes of the twins on video while he worked. The video shows the humanity of the children – from their tiny toes and feet to their fingernails. You can see their little pouty lips, their elbows, and their little hands reaching up to touch their heads.

Children at this age are targeted for abortion for all reasons. Whether it’s for social, financial, or medical reasons, abortionists have no problem ending a child’s life at 22-weeks gestation through a Dilation and Evacuation abortion commonly referred to as a D&E. The child is brutally dismembered, as explained in this video by former abortionist, Dr. Anthony Levatino.

With a one in three chance of survival, the twins, named Henry and Sebastian, came through the surgery and were born healthy at 32 weeks gestation. Their mother is grateful for their lives and hopes that the video will raise awareness and help save other lives.