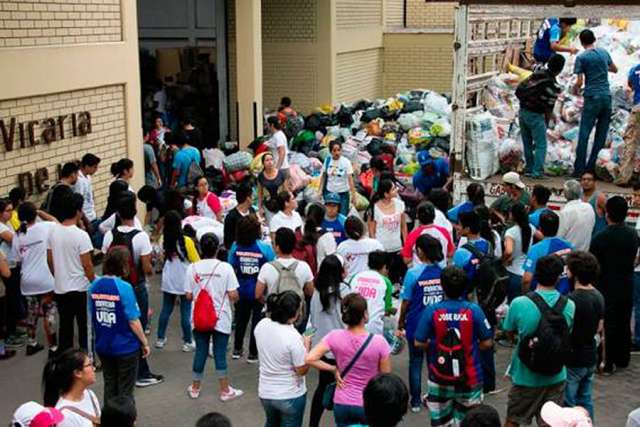 A massive flooding crisis in Peru prompted leaders of the country’s annual pro-life march to cancel the event Saturday and focus on helping the flood victims.

Heavy rains caused massive flooding and mudslides this month in the South American country, leaving hundreds of thousands of Peruvians without homes and causing nearly 100 deaths, according to the Los Angeles Times. Many more homes and properties were damaged in the flooding, and there is a huge need for food, clean water and other basic supplies.

As a result, the leaders of the March for Life in Lima canceled the annual event on Saturday and urged people to donate to the flood victims instead, according to the Catholic News Agency. Reports say more than 8,000 families lost their homes in the capital city alone.

About 3,000 volunteers participated in the pro-life/flood relief event Saturday, according to CNA. The pro-lifers collected nearly 4,000 gallons of clean water and several tons of food for the flood victims.

“The March for Life, faithful to its commitment to life, today becomes a Solidarity March with all the victims, because the Church must live with a beating heart, not just with prayer and the sacraments, but also with love for our neighbor with works of charity” Cardinal Juan Luis Cipriani of Lima said on Saturday during his weekly radio program.

Archdiocese spokesman the Rev. Luis Gaspar also thanked “the thousands of Peruvians who today marched not only for the lives of the unborn children, but brought aid for our brothers in need. We are the largest march in Peru and today it was up to us to shoulder our responsibility.”

Peru is a strong pro-life country, and the annual march typically draws huge crowds to the capital. In 2016, an estimate 750,000 Peruvians marched in Lima to celebrate the value of every human life from conception to natural death.

The Peruvian government also recognizes March 25 as the Day of the Unborn Child. According to the march website, the day is “based on article 1 of the Political Constitution of Peru, which states that: ‘The defense of the person Human dignity and respect for their dignity are the supreme end of society and the State.’”

Unborn babies are protected from the moment of conception in Peru, and abortion is illegal. Peruvians have rejected continued pressure from abortion activists to change their life-saving laws. In 2015, lawmakers in Peru dismissed a bill that would have allowed abortions of babies conceived in rape, LifeNews reported.