It’s been somewhat entertaining to watch as Planned Parenthood tries desperately to hold on to its federal funding under a new, far less abortion-friendly administration. They’ve claimed that their defunding would mean a “healthcare crisis” for women. Yet the numbers certainly say otherwise.

Consider that Planned Parenthood sees only about 2-3 million patients each year and that in 2012, there were 75.4 million women of childbearing age in the United States. So even if Planned Parenthood were to disappear, other entities providing healthcare to women could easily step in and fill the very small void.

So why, exactly, would defunding Planned Parenthood be a healthcare crisis for women?

Those numbers are pretty self-explanatory, but there are many other examples of Planned Parenthood struggling to make their numbers work in their favor.

Planned Parenthood and its supporters love to claim that abortion makes up only 3 percent of their services. But as Slate explains in its article, “The Most Meaningless Abortion Statistic Ever,” the claim is just “downright silly.”

“Planned Parenthood ‘unbundles’ all of its services so that a pack of pills, an STD test and an exam are three separate services,” the article explains.

We go into more detail in the video below. 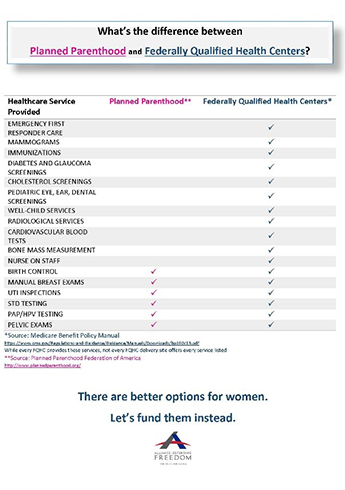 from the practice of ending lives in the womb compared to its other “services.” That number is much, much higher than 3 percent.

Planned Parenthood has tried to justify why they should receive more than $500 million in taxpayer dollars each year by hyping their non-abortion services, saying that they really focus on women’s health. But in reality, they offer significantly less medical services for underprivileged women compared to federally qualified health centers, which already far outnumber Planned Parenthood abortion facilities.  Consider, in particular, the fact that the number of cancer screenings provided at Planned Parenthood facilities is actually decreasing. 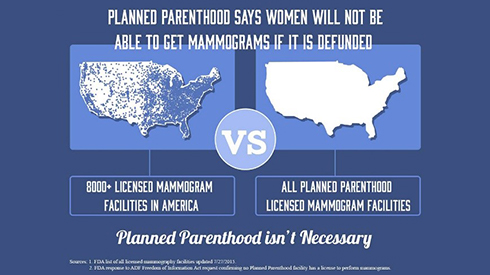 The abortion giant even threw a tantrum when Susan G. Komen pulled its funding after Komen decided that they only wanted to give to organizations that are actually using mammography to save women’s lives. Planned Parenthood bullied the Komen organization until the funding was restored—funding that resulted in exactly zero mammograms for women in need.

The mammogram claims are similar to Planned Parenthood advertisements of “prenatal care.”

Once this was exposed, the backlash was not favorable to the abortion giant, which, after a few PR twists and flips, removed “prenatal care” from its location pages. 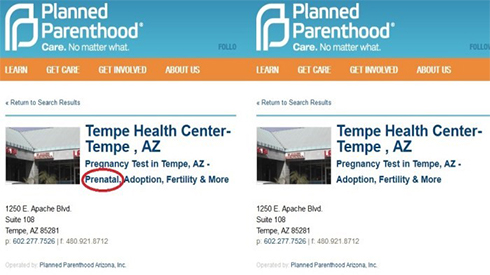 Maybe next they’ll remove “adoption” too, considering that Planned Parenthood commits 174 abortions for every adoption referral they make.

The Healthcare Crisis That Will Never Be

Planned Parenthood wants us to believe that the world will end if they’re defunded. But in reality, women will be just fine without them.

Say, where is that annual report anyways?

As The Daily Signal and LifeNews have mentioned, Planned Parenthood has yet to release its 2016 annual report, despite regularly releasing those reports in late December or early January for the last few years.

Hmm… Perhaps Planned Parenthood is still having some trouble making the numbers work in their favor.

LifeNews Note: Marissa Mayer is an Arizona native who fell in love with the written word at a young age. She writes for Alliance Defending Freedom.