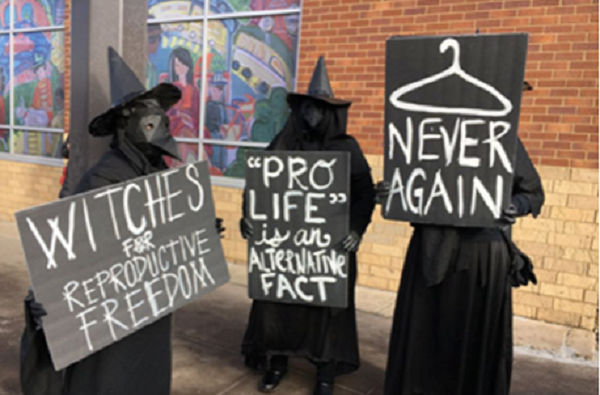 This weekend, there were pro-life #ProtestPP rallies scheduled at more than a quarter, over 200, of Planned Parenthoods across our nation. And the violence and hatred that our team saw at multiple locations was not only frightening but it was a clear warning sign to you and me.

In Portland, where our Northwest Coordinator (Katie) spoke, the abortion supporters where already at the Planned Parenthood by the time the pro-lifers arrived for their rally. They immediately starting yelling obscenities, swinging long hard plastic jump-ropes around hitting the pro-lifers, pushing and shoving those who gathered, and had signs that said “abort everyone,” “p*ssy bites back,” “your kids an a**hole,” “thank God for abortions,” etc.

In Washington, D.C. where our Capitol Area Coordinator (Lori) spoke, police had to shove abortion supporters back as they blocked the streets the pro-lifers had gotten a permit to march down during their prayer walk. The police ended up escorting the pro-lifers all the way to their destination to protect them.

In St. Paul, where I spoke, there were witches that came out to support Planned Parenthood and only spoke to us to tell us the name of their coven. When streaming coverage of the event live on Facebook, we began to ask the abortion supporters about why they were there. One woman with a “keep your laws off of my body” sign tried to grab and steal my camera phone. How about, keep your hands off my phone!

Over the past few years, we’ve been lucky. We would hold rallies and protests and only a few abortion supporters would come out to heckle us.

But something has changed in our nation.

The other side knows that they are losing. We’ve pushed the pro-abortion lobby into a corner. They are desperate and now they feel like they have to push back harder than ever before…and they don’t fight fair.

This is important because we can’t let the radicals who advocate for taxpayer-funded abortions in all nine months drive the media narrative. Every time they rally, we need to be there in stark comparison, with smiling, youthful faces. We need to show our nation’s media and those politicians in Washington who pay attention to the media that this generation really is pro-life and we are expecting them to hold up to their promises.

When our team crashed the so-called “Women’s March” last month, I got a first-hand glimpse of what our nation would look like without faith. The people who had gathered in D.C. were angry, sad, and desperate. You see, the Left has said that believing in God is anti-intellectual, it’s passé, yet they have replaced their beliefs in sinners, fallen men and women like you and me. So when their candidate lost the presidential election this November, they lost all hope.

But the Pro-Life Generation is different. Even in the years when we knew President Obama and Congress were going to do everything possible to fund the abortion industry and push back against any life-saving legislation, when we gathered at the March for Life, there was still a sense of joy and hope…because we placed it in something else, someone else.

And this is what makes the other side so dangerous, they have lost their hope, and they have nothing left to lose.