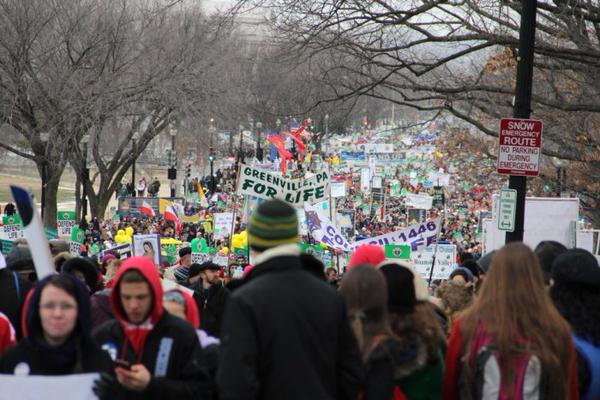 Pro-lifers have come to expect bias from the mainstream media, which could be why some quickly took notice of a recent New York Times article about the March for Life that barely mentioned the name “March for Life.”

The Washington Examiner’s T. Becket Adams appears to have been the first to notice the article’s failure to mention the actual name of the march, except in passing.

The NYT report, published on Wednesday, focused around Kellyanne Conway, President-elect Donald Trump’s campaign manager and White House advisor, who plans to speak at the March for Life on Jan. 27 in Washington, D.C.

Overall, the piece was friendly and balanced. Journalist Sheryl Gay Stolberg quoted leaders from several pro-life groups and featured information about the march, its speakers and the current political climate surrounding the abortion issue.

But, as the Washington Examiner noted, references to the actual name “March for Life” were noticeably missing. In the 700-plus report, the event’s name is mentioned just once in a description of March for Life President Jeanne Mancini’s title. The NYT used the phrase “anti-abortion march” several times, including in the headline.

Here’s more from the Examiner:

The report’s author, Sheryl Gay Stolberg, claimed Thursday that the version of the article she submitted to her editors included more than one usage of the annual demonstration’s proper name. However, she said, her copyeditors removed all but the one reference from the story.

“I personally did use March for Life. Alas, working for [the New York Times] sometimes means copy editors change things while you are eating dinner,” she said on social media.

The Times’ executive editor did not respond immediately to the Washington Examiner’s request for comment.

As Adams said, the problem could have been a simple editorial oversight. However, the newspaper has not updated its online version since the Examiner contacted the Times editors or reported about it on Thursday.

The problem may seem small and harmless, but the New York Times and other mainstream news outlets have developed a reputation for bias against pro-lifers.

Just last year, the NYT reported that “hundreds” attended the March for Life in Washington, D.C., vastly underestimating the pro-life crowd. Later, The Daily Caller’s Evan Gahr said the newspaper refused to consider his requests for a correction. Other news outlets estimated the crowd to be in the thousands or tens of thousands.

A similar problem occurred in August 2015 when the NYT took 16 days to admit that the full, unedited undercover videos of Planned Parenthood by the Center for Medical Progress were released. It also had to print a correction in June 2015 after it misstated when unborn babies are viable.

The New York Times is not the only news outlet with a bias problem. In January 2016, the Media Research Center reported the three major TV news networks ABC, CBS and NBC dedicated more than 9 ½ minutes to a story about the National Zoo’s new panda cub — 26 times more coverage than they gave to the 2016 March for Life.