Last week, the CDC released its annual abortion surveillance report (for 2013, because it’s always behind). The big story the media picked up from it was that the American abortion rate has once again hit a record low. Of course, that’s welcome news. But dig deeper, and the report also contains some extremely disturbing findings.

If you have a weak stomach, stop reading and just trust me when I tell you it’s worse than you think.

Scroll to the bottom, where you’ll find Table 22 (click to enlarge): 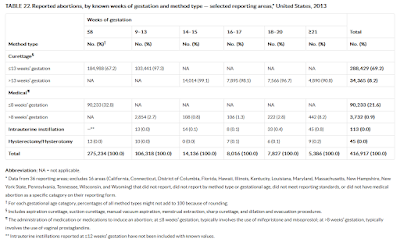 First of all, note that this table only includes data from 36 states, so every number I’m about to mention comes with the huge caveat “at least.” The true numbers are higher.

Well, it happens. It happened at least 113 times in 2013, mostly on older fetuses. It happened 45 times to babies older than 21 weeks, who could have lived outside the womb. Babies old enough to feel the pain of the saline solution burning their lungs. Babies the size of famous preemie Amillia Taylor when she was born:

Horrific. And they wonder why those cuckoo anti-choicers won’t just shut up.

The next row is abortions committed by “Hysterectomy/Hysterotomy.” A hysterectomy, of course, is the surgical removal of the uterus—in this case, a uterus with a child inside. A hysterotomy is an incision of the uterus, of the kind used in C-sections. The difference between a C-section and a hysterotomy abortion is whether the attending physician intends for the baby to live or to die.

Hey, remember when Donald Trump was asked about abortion during a debate, and he said Hillary Clinton’s extreme position would allow abortionists to “rip the baby out of the mother,” and liberal media types pointed and laughed and wrote think pieces declaring that that’s totally not how abortion works, right guys? In 2013, forty-five babies became victims of abortion by hysterectomy or hysterotomy methods. Nine of them were 21 weeks gestation or older.

My unfavorable opinion of Trump is well-known, but I’ll concede he got that one right.

Late-term abortions are only “rare” in relationship to the many more abortions that occur by common methods in the first half of pregnancy. They are not rare in absolute terms. Even a single child’s death in such a horrific manner is completely unacceptable.