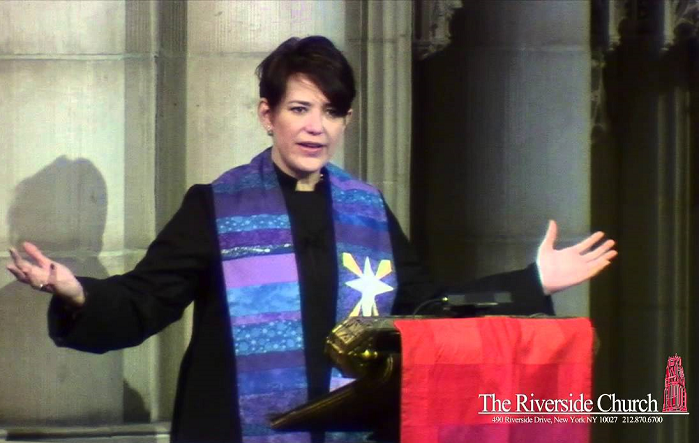 Another woman with a painful pregnancy story defended her late-term abortion this week in reaction to Donald Trump’s remarks at the last presidential debate.

During the Oct. 19 debate, Trump exposed the brutal nature of late-term abortions and the extremism of pro-abortion challenger Hillary Clinton, who supports late-term and partial-birth abortions up until birth.

The Rev. Dr. Amy Butler responded to Trump’s comments in a column for USA Today this week, explaining why she chose a late-term abortion for her daughter.

“As I heard Donald Trump talk about babies being ‘ripped’ from their mothers’ wombs, as if ending a pregnancy is a reckless, irresponsible afterthought, my outrage poured down my face in angry tears,” Butler wrote. “In those moments, Trump, who has never been pregnant and presumably has navigated this far in his life without undertaking any difficult, gut-wrenching, gray-area decisions, used my own pain — deep, deep pain — to advance his political agenda.”

A minister at The Riverside Church in New York City, Butler said her decision to abort her daughter “ended a dream” for her and her husband. She described how excited she was when they found out that they were having a second child, a girl.

Then, during a doctor’s appointment late in her pregnancy, she sensed something was wrong. She said her doctor “was silent for too long” while viewing her sonogram images.

“The moments that followed were filled with one doctor after another entering the exam room, looking at the sonogram screen, then retiring to the hallway and whispered conversation with my doctor,” Butler wrote. “I kept asking what was going on, but nobody would tell me anything. As I sat there in the cold company of beeping monitors, my heart beat so fast and I felt so afraid.”

They told her that her unborn baby girl had a potentially fatal developmental problem and probably was in pain. She also learned that her own life was in danger if she continued the pregnancy to full term. The doctors gave her three options: abort, deliver the baby early, or wait.

Butler said she was heartbroken, but she did not think twice. She decided to abort her unborn daughter.

“For me it was important that the baby not experience pain, and that we have a little ability to say our goodbyes in as safe and loving way as we could,” she said. ” I didn’t know how we’d survive the loss, but I did know the right course of action for me, my baby and my family.”

If Trump’s words made you feel certain — or maybe even a little bit smug — that his position is the right one, then please consider my story, allow for another narrative and, at the very least, reject the political strategy of impugning motives without hearing real people’s stories.

Then join me in building an America where every child has what she needs, every little one has arms to hold him tight, and everybody’s story is honored for the holy humanity it reveals about each one of us.

Pro-lifers need to be clear about where we stand on such heartbreaking situations. Pro-lifers do not want to see women or their babies suffer or lose their lives. Butler did not give many medical details; but if her life was at risk, pro-lifers are okay with action, such as induced preterm labor or a C-section, to save the mother’s life even if it results in the baby dying. Tragically, in some rare circumstances, the mother and the baby cannot both be saved. These are not the situations that Trump or pro-lifers are referring to when they talk about late-term abortions.

What pro-lifers are opposed to is actively killing the unborn child in an unnecessary, brutal and often painful abortion procedure. Abortion is not a safe option or a painless one for a late-term unborn child or its mother. Late-term abortions are much more dangerous to the mother than early ones, and many doctors have confirmed that late-term abortion procedures (which are different from induced labor or C-sections) are not necessary to save a woman’s life.

Tragically, however, abortion activists have succeeded in convincing some heartbroken families that what Planned Parenthood founder and eugenicist Margaret Sanger said is true: “The most merciful thing that the large family does to one of its infant members is to kill it.”