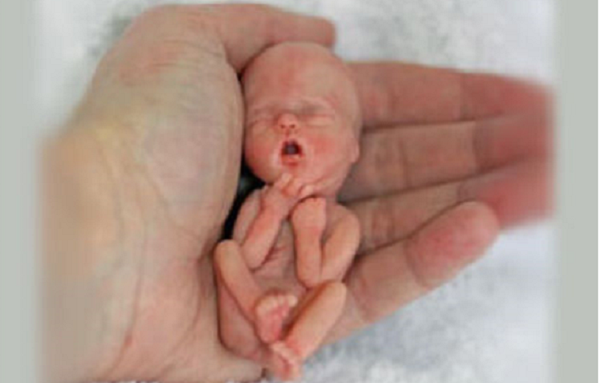 Does a child’s life have worth only when a mother says it does? If you posed that question about a child outside the womb, people would say it is ridiculous; of course a child is a valuable human being. What the mother says or thinks does not make a child’s worth change.

However, when the child is in the womb, some people’s answers change. Then, the situation becomes a woman’s “right to choose” whether the child has value, whether the child lives or dies, based on her situation and feelings at the time. Maybe she does not want a child right now, or she already has as many children as she wants – the reason Planned Parenthood CEO Cecile Richards gave for her abortion.

This contradiction was clear to Lindsay Schlegel as she watched the last presidential debate between Hillary Clinton and Donald Trump. In a column for The Federalist, the mother and blogger said Clinton’s comments about late-term abortions brought back memories of her son who she lost in a miscarriage five years ago.

In defending third-trimester partial-birth abortion, Hillary Clinton mentioned she’d spoken with women who had made the difficult decision to have an abortion. She emphasized their pain and suffering. It occurred to me that perhaps she has not heard from the huge population of mothers—and fathers—who so wanted their children to live, but lost them before they were born. These are people like me and others who have shared their stories with me, who ache for their children day in and day out. …

If I could ask Clinton one question, it would be this: At what point did your daughter’s life start to matter? Perhaps it was when Hillary got a positive pregnancy test or when she started to experience morning sickness. It might have been when she felt her baby kick for the first time. Maybe it wasn’t until that first moment that she was able to look into her precious child’s face. Haven’t all of us, even those who aren’t parents, at some point experienced what I have—the awe of new life?

Is that life significant only when it is wanted? What makes my child human and someone else’s a mass of cells? Or is a child lost to miscarriage less-than, as well?

Similarly, what makes it OK to kill a late-term unborn baby who has a fatal disorder (something Clinton advocated for during the debate), but not a born child with the same fatal disorder?

Most pro-lifers have heard the arguments that every child should be a wanted child or that if abortions become illegal, more children will be abused. These are just different words that convey the same message – an unborn child’s value should be based on “wantedness.”

As Schlegel wrote: “If abortion is acceptable, if it is not the murder of a child, then my child’s life doesn’t matter. Because he wasn’t viable outside the womb, he wasn’t a child yet. He wasn’t human or maybe wasn’t human enough. That’s what I hear when I hear abortion defended. I agree that the conversation about abortion should also be about the mother. But there is no mother if there isn’t a child.”

Abortion activists treat unborn children as lesser human beings or not human at all. They base an unborn child’s worth on arbitrary things like feelings and situations rather than facts. But biologically, unborn children are unique, living human beings. They are not just blobs of tissue or parts of their mothers’ bodies. Killing them is wrong because they are human beings, just like a toddler or an adult is a human being.

Pro-life apologist Scott Klusendorf of the Life Training Institute puts it this way: “Philosophically, … there’s no relevant difference between the embryos we once were and the adults we are today that would justify killing us at an earlier stage. Differences in size, level of development, and environment, meaning where we’re located and degree of dependency, are not good reasons for saying you could be killed then, but not now.”

When abortion advocates like Hillary Clinton push abortion, they are not just devaluing the lives of unwanted children in the womb. They also are demeaning the lives of millions of babies lost to miscarriage and the parents who grieve them.