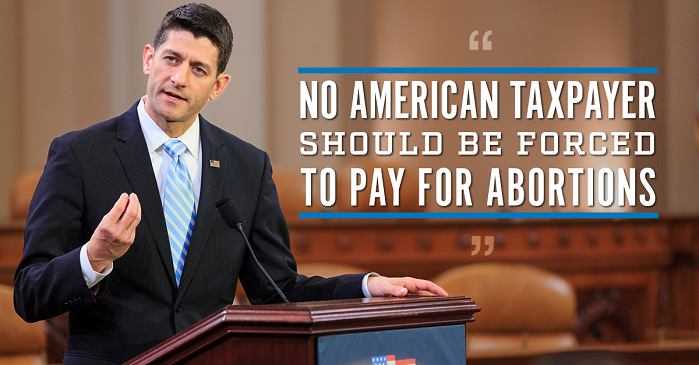 Leading pro-abortion groups like NARAL and Planned Parenthood are out in force today with a social media campaign designed to engenders support for overturning the Hyde Amendment and forcing Americans to fund abortions with their tax dollars.

But Speaker Paul Ryan is not having it.

In a statement LifeNews.com received, Ryan made it very clear that reversing Hyde and funding abortions was no go for launch.

“No American taxpayer should be forced to pay for abortions. The Hyde Amendment has been the cornerstone of protecting conscience for 40 years and is responsible for saving more than 2 million American lives. Make no mistake: The Hyde Amendment will remain central in our fight for life until the day Roe v. Wade is overturned entirely,” Ryan said.

Ryan has support in keeping the Hyde Amendment in place from Republican presidential candidate Donald Trump.

Earlier this month, Trump issued a call to make permanent the Hyde Amendment that bans almost all federal taxpayer funding of abortions and is credited with saving the lives of over 1 million Americans from abortion. Trump-‘s call comes as Hillary Clinton is campaigning in reversing Hyde and forcing Americans to fund free abortions for women with their tax dollars.

Every year, Congress is forced to fight the battle to protect Americans from being forced to pay for abortions with their tax dollars. Democrats annually fight the pro-life budget provision and hope they can eventually reverse it should they take control of both the White House and Congress.

That has led to pro-life groups calling to the adoption of a permanent law putting Hyde in place long-term and making it more difficult for pro-abortion forces to reverse. Today, Trump announced his support for such a law.

The call for banning taxpayer funding of abortions comes in a new letter from Trump. Trump commits to a new policy: “Making the Hyde Amendment permanent law to protect taxpayers from having to pay for abortions.”

“Hillary Clinton’s unwavering commitment to advancing taxpayer-funded abortion on-demand stands in stark contrast to the commitments I’ve made,” Trump writes, “to advance the rights of unborn children and their mothers when elected president.”

Marjorie Dannenfelser of the pro-life Susan B. Anthony List praised Trump for calling for banning taxpayer funding of abortions.

“Not only has Mr. Trump doubled down on his three existing commitments to the pro-life movement, he has gone a step further in pledging to protect the Hyde Amendment and the conscience rights of millions of pro-life taxpayers. For a candidate to make additional commitments during a general election is almost unheard of,” Dannenfelser said.

Earlier this year, campaigning in New Hampshire, Clinton made her support for tax-financed abortions clear.