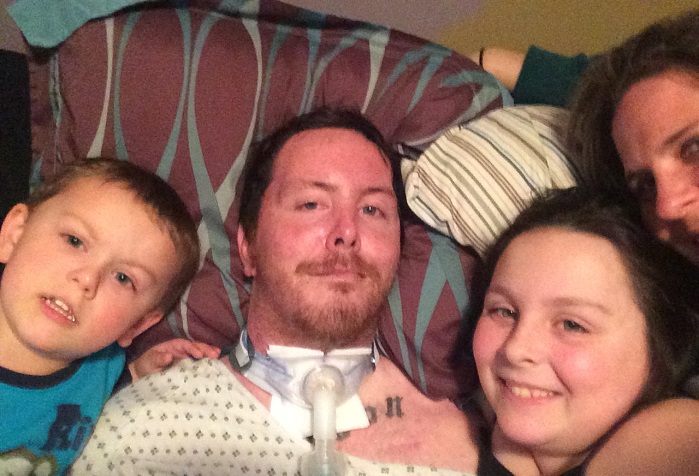 Two years ago on a winter morning, Jay Hendry suffered massive brain injuries in a car crash while driving his son to school. But it was at the hospital where his wife had to fight the hardest to save his life.

In an interview with LifeNews, wife and mother Megan Hendry explained how she refused to give up on her husband despite doctors’ recommendations to pull the plug and end his life.

Today, Megan said Jay is able to talk and interact with family at their Pennsylvania home. He can play games with their three children, and sometimes he even tries to help with the chores.

“I do take care of all his personal care needs, but he is interactive with our family,” she said. “He loves watching the kids play. He talks, in a whisper, but he talks and is lucid. If Jay was able to receive rehab from the beginning, his prognosis would have been much higher, however since only his family believed in him, it didn’t happen.” Two years ago, Megan said she sensed that something terrible had happened when her husband left to take their son to school on that January morning. There had been a big snowstorm a few days earlier, and the roads were icy and wet, she said.

Their vehicle hydroplaned about a mile from their home, and both Jay and their son were taken to a trauma unit. Megan said their son was discharged the next day, but Jay spent several months in the intensive care unit. Jay sustained serious injuries, including severe traumatic brain injuries that left him in a coma.

Initially, doctors told Megan that Jay may not wake up and if he did he could be in a “persistent vegetative state.” Others said he would require 24-hour care in a nursing home. But Megan, a nurse, knew that the doctors were wrong.

Remembering those first few months in the hospital, she said: “… he would respond to me. I was told I was imagining the things I was seeing because I wanted to see them that bad. It wasn’t true though; although he was only responding to me, other people saw it and not just family, but it wasn’t documented because he wouldn’t do it for the staff. I started video taping his every move. It didn’t matter, their minds were made up from the beginning. I was told I was selfish and not thinking of what was best for him.”

Over the next several months, Megan had 17 discussions with doctors about whether to end her husband’s treatment and pull the plug, she told blogger Karen Pyros in 2015.

“I couldn’t give up hope because of the feeling that everything was going to be okay never left me. God was with us always,” she said.

After a lot of persistence, Megan finally was able to find a rehabilitation facility that was willing to work with Jay and help him recover. While she was searching, Megan provided a lot of her husband’s care herself.

“I never gave up on Jay, but eventually gave up on trying to get him into a rehab and when I gave up, he got in and completely by accident,” she said.

Megan said finances also were an issue, but she did not base her decisions about Jay’s life and care on money. When she brought him home, she said she was still working full-time and raising their children. She said she applied for a state assistance program to provide care for Jay while she was working, but her application was denied because they said her income was too high.

Eventually, she decided to quit her job to care for him full-time herself. Megan said she thankful for family and friends who help her, but she expressed frustration at the government system where many have to choose between working and quitting in order to receive assistance for a loved one.

Jay is on a slow road to recovery. Megan said he can move his arms and legs. He talks and interacts with their children – “but it takes a lot of practice, so he has a far way to go.”

Unfortunately, two weeks ago, Megan said Jay had a prolonged seizure, and he currently is in the hospital. However, she remains hopeful. When he recovers enough, he will go back to rehab before returning home, his wife said.

When asked about people who question Jay’s “quality of life,” Megan said she sometimes is asked about it. After Jay was recently hospitalized, she posted this message on Facebook:

The past few days I have gotten a lot of questions and I know they were all with good intent out of pure friendship and love for me. Questions basically like why go on from here with Jay… Is it his time? And the answer is… His time all come just like all of ours would we don’t know when or how. Jay is still here. He is different. He has disabilities. But he is here. He’s not just a body with a trach and a feeding tube. He has feelings. He has pain. He has wishes and goals. He is mostly happy, sometimes he’s frustrated and confused, but aren’t we all? Every day he wakes up, sees his kids, plays games with me or the kids or our aides and nurses, watches tv, tries to help with chores with much assistance but he tries. We have struggles. We have arguments. But we push through. He fights to live. He loves us and we love him. We have a greater chance at happiness than most people because although every now and then we get caught up in our financial troubles and our inability to go some places due to inaccessible handicap access we always focus on the now, the little things. We are here, we are humble and we have love. I wish it wasn’t so hard, but it is what it is and we will live these moments as best we can with what we are given by God.

Megan’s brother, Nick Curran, who originally contacted LifeNews about the family, said, “I think that they exemplify what it is to be pro-life from conception to natural death.”