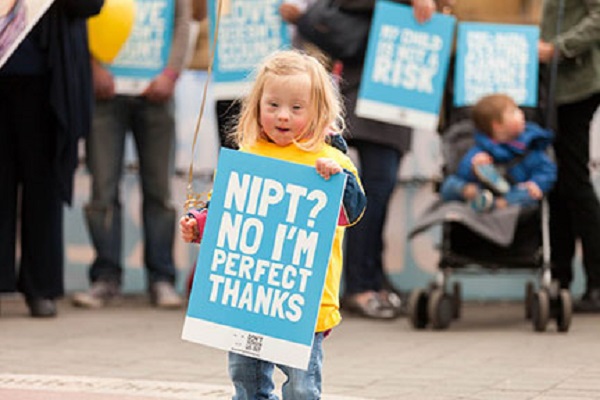 We’ve closely followed the “Don’t Screen Us Out” movement in Great Britain. Campaigners are working to raise awareness that Down syndrome is not a “disease” to be eradicated and to explain that a new “Non-Invasive Prenatal Test’ [NIPT] purported to be 99% accurate will result in the deaths of even more babies diagnosed not only with Down syndrome but also with Patau’s and Edwards’ syndromes “and could be used to detect all known genetic abnormalities,” according to Sam Greenhill of the Daily Mail.

In a letter to Health Secretary Jeremy Hunt, the campaign group Don’t Screen Us Out says the NIPT programme ‘is projected to result in a profound increase in the number of children with Down’s syndrome screened out by termination’.

It added: ‘This would have a profound long-term effect on the community of people with Down’s syndrome. These concerns are being constantly ignored by the Government. This must stop.’

Dr. Elizabeth Corcoran, of the Down’s Syndrome Research Foundation, said: ‘We demand Jeremy Hunt halt the roll-out of NIPT and listen to the views of people with Down’s syndrome and their families.

‘Make no mistake, this is will not be to the benefit people of with Down’s syndrome, born or unborn.

‘Anyone with a detectable genetic condition can expect the same fate for research into their condition when NIPT rolls out.’

‘NIPT will affect the future of humanity, it is a powerful technology with a potential for abuses.’

It is estimated that one baby in 1,000 in the UK is born with Down syndrome.

Currently the NIPT is available privately but government advisers have recommended it be introduced on the National Health Service. According to Greenhill the government was poised to approve the recommendation with an estimated cost of less than half what private screenings cost.

The Society for the Protection of Unborn Children (SPUC) explains that

The new test would use non-invasive prenatal testing (NIPT) – also known as cell-free DNA testing – to screen a pregnant mother’s blood for tiny fragments of DNA. These fragments are then checked for genetic abnormalities like Down’s syndrome towards the end of the first trimester of pregnancy (between 11 and 14 weeks).

“It is an open secret that any day now NIPT will be offered as an additional test for Down’s syndrome and other conditions,” said Tom Shakespeare, who is chairing a group at the Nuffield Council on Bioethics charged with examining the ethical consequences.

He called for a public debate on whether couples had a right to know everything about their unborn child.

The advisory body, the UK National Screening Committee, found that, under NIPT, 102 extra babies a year would be confirmed as having Down’s.

Since an estimated 90 cent of women with an unborn Down’s baby opt for an abortion, campaigners claim it would lead to an additional 92 terminations a year.

The Don’t Screen Us Out movement picked up considerable momentum when Heidi Crowter’s speech at a rally outside Parliament went viral.

“My name is Heidi, I’m 20 years old, l work in a hair salon, I have Down’s syndrome, and my life is just as important and just as joyful as anyone else’s.

When parents are told their baby has a disability, they don’t always get the support and information they need, and are not told that their little one can thrive and blossom.

They are not told the potential this new human life has, and how much love and happiness they can have and bring to the lives of their family and society.

The Government are considering introducing another test that could lead to less children with Down’s syndrome being born every year.

This is because our society, and the health services, don’t realise that children with disabilities are part of the diversity and richness of life.

Parents need to be shown the support and given help to have and look after their babies instead of being faced with a hopeless choice.

Mums and Dads should be given the help they need so that they don’t see a disabled baby as a worry but the beginning of their happy adventure.

Jeremy Hunt, don’t screen us out, work with us so that we can make a society that treats everyone with the dignity, and respect, and compassion, and love that we all deserve.”