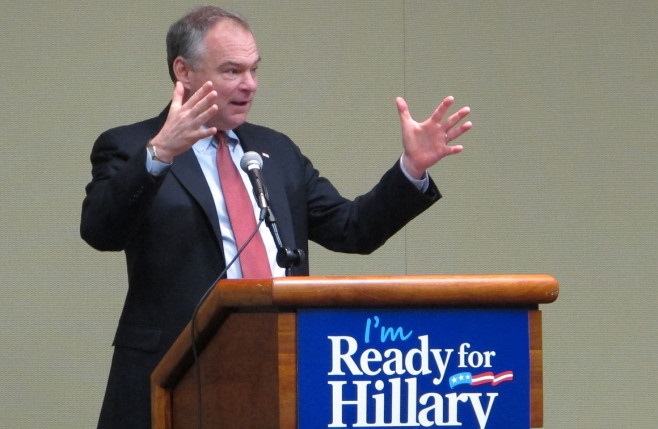 Hillary Clinton’s vice presidential running mate Time Kaine is falling in step with her calls to force taxpayers to pay for abortions.

Kaine is Catholic and has painted himself as a moderate on abortion, but lately it has become clear that he is pro-abortion. The Weekly Standard reports Kaine recently flip-flopped on his position about taxpayer-funded abortions and now supports them.

On Tuesday, CNN tweeted that Kaine now holds the same position as Clinton, who is calling for an end to the Hyde Amendment and support for taxpayer-funded abortions.

Clinton spokesman @JesseFFerguson tells me @TimKaine‘s commitment to stand w/ Hillary on repealing the Hyde amendment “was made privately.”

Clinton campaign manager Robby Mook also spoke to CNN on Tuesday about Kaine, saying “voters can be 100-percent confident that Tim Kaine is going to fight to protect a woman’s right to choose” abortion.

It’s a reversal of Kaine’s previous statements. Just three weeks ago, when the Weekly Standard asked Kaine if he supported the new Democratic Party language calling for an end to the Hyde Amendment and support of taxpayer funded abortions, Kaine replied: “I haven’t been informed of that change, but I’m going to check it out. I have traditionally been a supporter of the Hyde Amendment, but I’ll check it out.”

Back in 2005 when Kaine was running for governor in Virginia, he clearly stated that he opposed taxpayer funding of abortion.

“I support restrictions on abortion — no public funding and parental consent — and I’ve worked to pass a state law banning partial-birth abortion,” Kaine said in 2005.

Ending the Hyde Amendment and forcing direct taxpayer funding of abortion has become the pro-abortion movement’s No. 1 goal. Abortion activists have a promise from Democratic presidential candidate Hillary Clinton to help push the agenda, and liberal media outlets are falling in line, too.

Earlier this week, the Democratic Party approved its most extreme pro-abortion platform yet, calling for taxpayer-funded abortions and an end to Hyde. And Kaine, as Clinton’s vice presidential running mate, is falling in line with the party agenda.

As LifeNews previously reported, Kaine said he is a “strong supporter of Roe v. Wade”  despite supposedly being a “traditional Catholic.”

He also has a pro-abortion record. As a U.S. senator, Kaine voted against the pro-life position every chance he got. Sen. Kaine voted to allow government funding of abortion providers, and he voted against legislation to require an abortionist to notify at least one parent before performing an abortion on a minor girl from another state.