We experienced an aggressive protest at UC Davis, but this is part of a disturbing, growing trend of censorship of conservative speech on college campuses.

This is an extended version of an article from our last printed newsletter. Warning: This blog post includes strong language when directly quoting leftist protesters.

On February 29th through March 1st at UC Davis, we faced our most aggressive, persistent, and unreasonable protest yet.

As many of you know, our preferred way of doing outreach is to set up a simple poll table that asks questions like, “Should Abortion Remain Legal?” and provide options for people to sign Yes, No, or It Depends. While we do keep track of the results of these polls to pay attention to trends, they aren’t scientific and we don’t ask the question in order to track people’s answers. We just want to dialogue with people and give our volunteers an opportunity to use what they learned at our training seminar.

We don’t put up signs with abortion images. If you want to learn about how we use abortion images, go to EqualRightsInstitute.com/Images. In short, we think the images are valuable and sometimes persuasive, so we have them in our brochure and we train our volunteers to use them in their conversations. Our rule is that we don’t show people abortion images without their consent, which is purely for pragmatic reasons. We don’t think it’s evil to put abortion images on signs, but we have found it to be counter-productive if our goal is to have persuasive dialogues with people.

The pro-choice club found out that we were coming to do an event of some kind on Monday and Tuesday and they assumed we were going to do a graphic image outreach. They came prepared to protest us with umbrellas and signs that said “graphic images ahead” and “let us be your umbrella escort.” They were literally offering to escort people past the most unintimidating pro-life display they’d ever seen. To the casual observer, we could have been a pro-choice table, or a table run by people that were undecided but interested in people’s opinions.

The protesters eventually realized that we were having friendly and productive dialogues, so they got tired of protesting us by standing 75-feet away and holding their signs. In the afternoon, they figured out an effective way to actually interfere with our event: they formed a protest line in front of our table. This turned our table from a comfortable, inviting place for conversation into a place where people expected to be yelled at, and it effectively shut down our table. We asked the university administration to respect our free speech event and tell the protesters to give us some space. They refused to do anything. 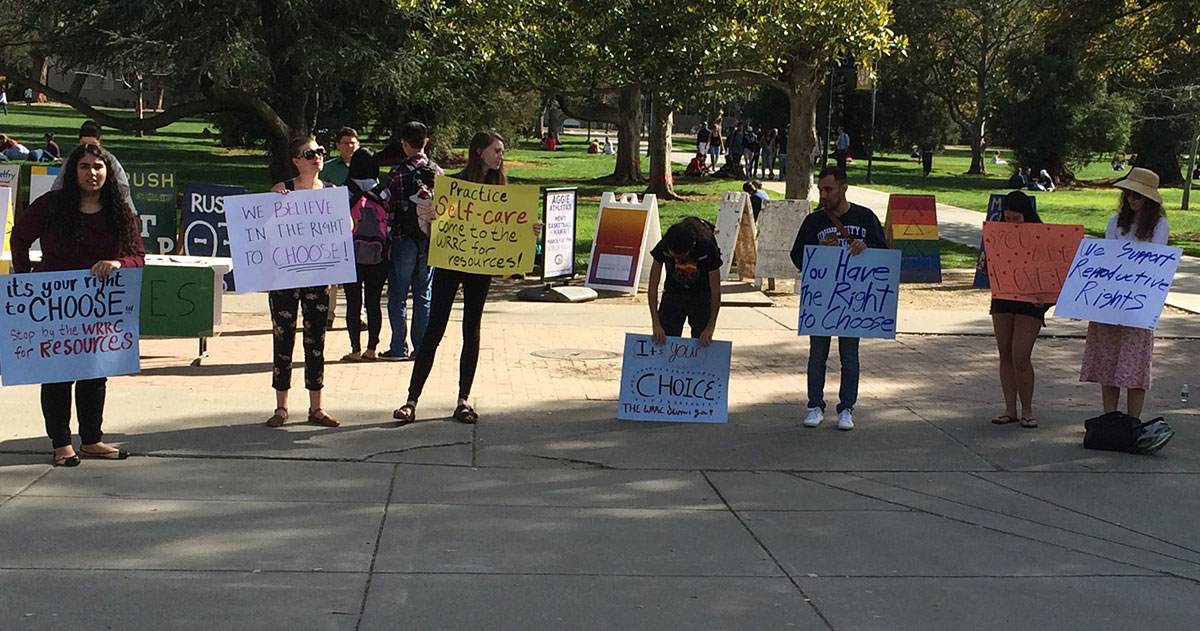 Pro-choice protesters at UC Davis in a line in front of our poll table.

We didn’t want our table to be shut down again by a line of angry protesters, so that night we decided to try something different, if it became necessary. We asked our friends from Project Truth, who were volunteering with us for our event, to bring their graphic abortion image display, but to not set it up. We hoped the protesters wouldn’t block our table again, but sure enough by late morning there was a line of fifteen to twenty, screaming at us if we tried to talk to them, dancing to music, hula-hooping, and waving their signs and umbrellas. The university administration just watched.

Pro-choice protesters at UC Davis in a line in front of our poll table.

Finally one of the protesters walked up to our table, and with a look of contempt (right in front of me), knocked everything off our table that she could reach. The protesters cheered as the vandal walked away triumphantly. Campus security and the university administration was reluctant to do anything. Eventually, when pressed, they got the student’s information and talked to her. 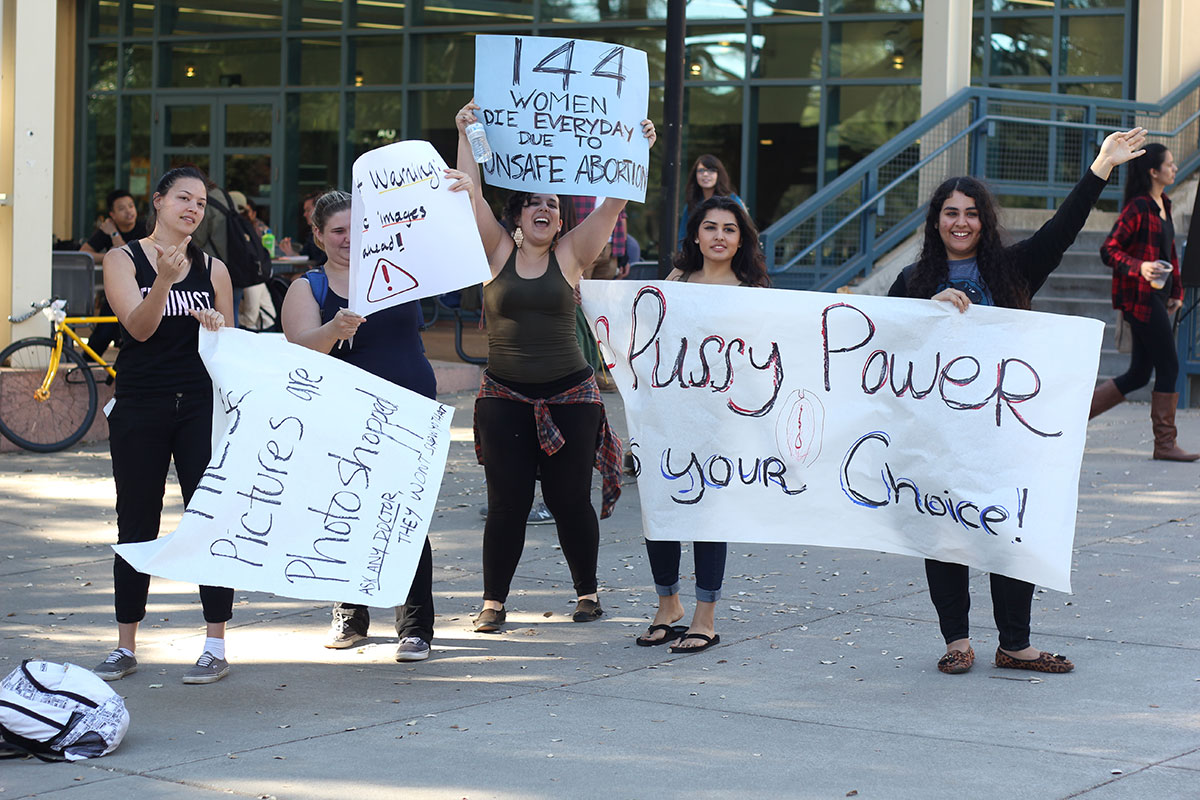 The protest became ridiculous enough and aggressive enough that dialogue became almost impossible. One of the Project Truth guys presented the protesters with our offer: “We just want to have friendly dialogue but you guys aren’t letting us do that. You can do your protest away from our table so we can have conversations with people. If you aren’t willing to give us any space, then you aren’t giving us any choice but to get our message out another way, and we’ll set up the graphic display. That isn’t the kind of day we want to have today, we just want to have conversations. It’s up to you.” They refused, so we ended the ERI event and allowed Project Truth to take over. 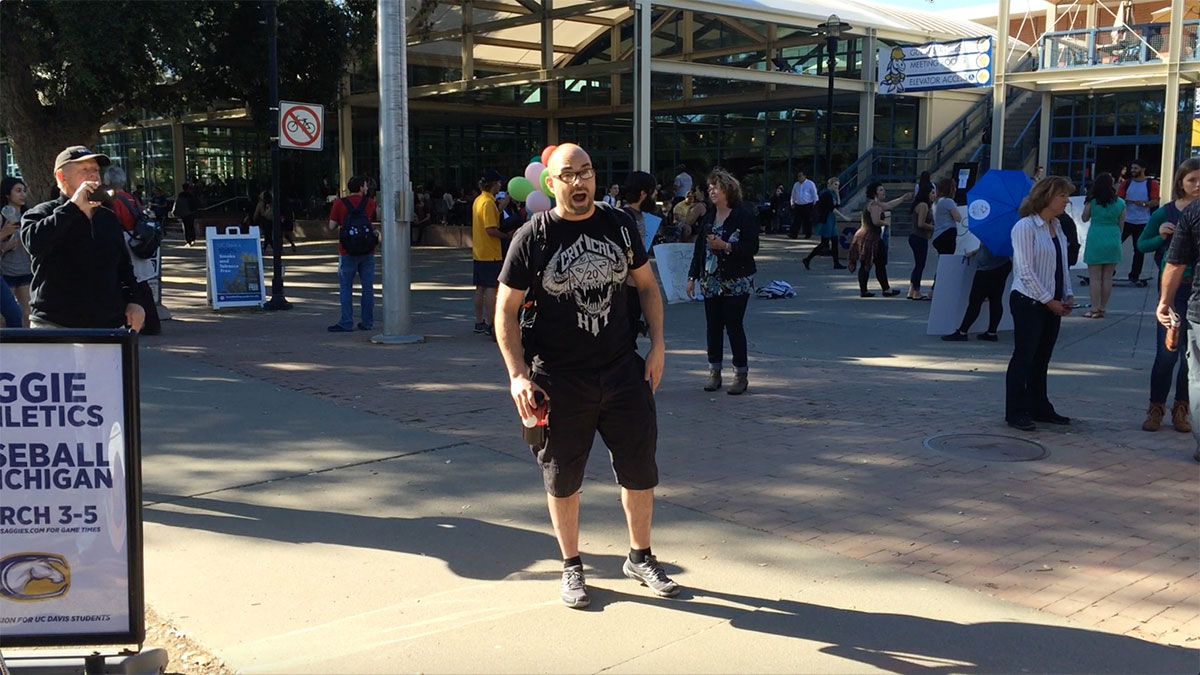 The university administration was thoroughly uninterested in the fact that the protesters interfered with our free speech event to the point of shutting it down. On at least four occasions (a student who Project Truth has known to be physically aggressive) came over to shout at us. It appeared that he was looking for a fight, at one point even saying, “If I were mentally unstable right now, I would knock you out.” The administration only acted on the last occasion when he got within inches of one of our volunteers. Even though this happened after the vandalism at our poll table, the campus security officer had inexplicably left the area, and the watching administrators never called them to come back to monitor the increasingly tense situation. 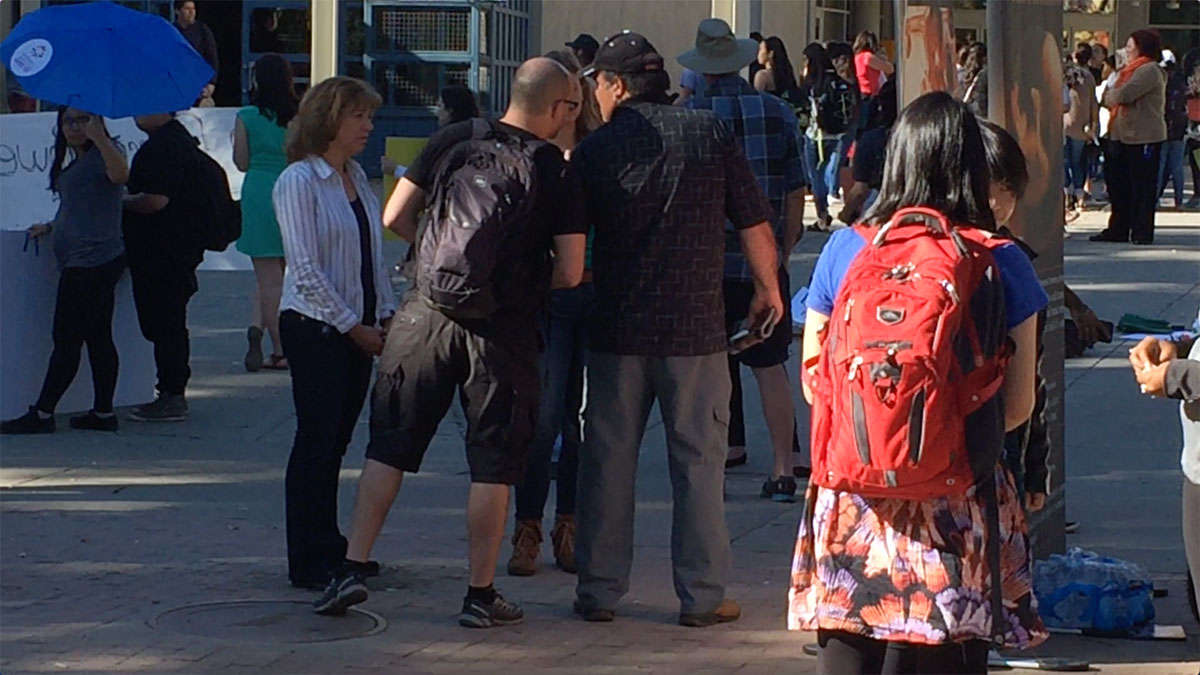 The same student gets within inches of our volunteer moments before a UC Davis administrator (not pictured) encouraged him to back off.

The political climate of leftist universities is only getting more difficult. Many pro-choice students and faculty of universities like UC Davis are not interested in rational discussion. They’re interested in censoring the other side by any means they can possibly get away with, and the administration allows them to get away with a great deal.

Here are four other recent examples of this:

Just four days before our event at UC Davis, hundreds of leftist protesters formed a blockade attempting to shut down conservative speaker Ben Shapiro’s event that was hosted by the campus chapter of Young Americans for Freedom.

Jeffrey Minter, a Ben Shapiro fan, described what happened to him in a clip from the upcoming documentary, “Silenced.” (5:45 in the video):

I was thrown to the ground; punched; people threw water at me; I was kicked whenever I was near people, they were kicking my shins. It was just violence, and they kept shouting “No violence!” at us the entire time, which was really odd in my mind, because, first off, a [human] wall is violence. Stopping people’s movement is the first act of violence.

A woman named Sarah Williams also attended the event, saying that she just wanted to “attend a lecture about free speech.” She said later: (9:17 in the video)

Once you tried to get towards the people who were organizing the event or towards the front door of the auditorium, people immediately started shoving you, spitting on you, I was called a ‘racist c–t’ by grown men. . . the protesters who were supposedly protesting in peace, as they were screaming “No violence!” were punching me, kicking me. I was physically assaulted and pinned against a wall, and told there is no cop to help me now.

#2: Leftist Admits She Doesn’t Want to Have a Civil Discussion

Another example: About one month ago, a female student approached some guys who had a pro-capitalism booth. To be fair, these guys act pretty obnoxiously eventually, but notice how the video begins: (Warning, very strong language.)

After she calls them a bunch of offensive names like “worms,” the video ends this way:

Conservatives: “So, are you gonna make a point, or…”
Leftist: “No, I’m just yelling at you, that’s my point.”

#3: Yale Student Screams at Faculty that the Campus Should be a “Place of Comfort”

In November of last year hundreds of Yale students called for the resignation of Associate Master of Silliman College Erika Christakis after she made comments about balancing the right to free expression with the value of not being purposefully offensive in racist ways.

Watch a part of a confrontation her husband, Master of Silliman College, Nicholas Christakis, who defended her statements:

The most recent example of absurd leftist behavior on a college campus was at an event by conservative speaker Milo Yiannopoulos at DePaul University (click here to read Breitbart’s summary of what happened, fair warning, some of the description of the event is crude). Protesters completely took over and shut down the event. They took over the stage, grabbed a microphone from an interviewer, and even threatened to punch Yiannopoulos. There was plenty of campus security present and they refused to do anything to protect the university’s invited guest.

It’s gotten so bad that former ACLU president Nadine Stressen said in an interview with JConline:

Surveys have been done, including one recently by Pew (Research Center) about attitudes of college students and faculty members and of young people generally. They show very tepid support and, in some cases opposition, to cardinal free speech principles. You know, Oliver Wendell Holmes saying, “Freedom from the thought that we hate,” is just not cutting the mustard with people on college campuses. … Sadly, support for robust free speech is declining among liberals as it’s ascending among conservatives. And faculties typically are dominated by liberals. … It really appalls me, based on experience and not just theory, because censorship is the most damaging thing to anybody who lacks political power or espousing a minority position.

Click the video below to watch her full speech at Purdue University, “Freedom for the Thought that We Hate:”

Even President Obama has criticized this terrifying trend:

So what should we do in the future when we experience this kind of protest or censorship?

At the time of writing this, the ERI staff is undecided regarding whether our experiment at UC Davis was the best option. Our main concern with abortion images on signs is that we think it often interferes with productive dialogue. But what if protesters shut down dialogue? Do we just leave with our tails between our legs? Or do we at least allow passersby to know what the protesters are supporting? On one hand, abortion images are particularly effective at cutting through the rhetoric of handmade signs with lame slogans. On the other hand, it’s not like the environment became more conducive to dialogue after we let Project Truth take over. Most likely we will come up with a third option, bringing something on campus that can be used as a counter-protest, but without discouraging productive dialogue. Then we will film the people who are attempting to censor us and expose the evil after the fact. Conservative speakers who experience this kind of resistance should do the same. As I’ve said before, any open-minded person should be disgusted whenever people try to silence their political opposition. If leftists are confident that truth is on their side, then they should be humiliated by the pattern of leftists censoring conservative viewpoints on college campuses in the name of “creating safe spaces.”

The post “How Should Conservatives Respond to the Disturbing Trend of Campus Censorship?” originally appeared at the Equal Rights Institute blog. Click here to subscribe via email and get exclusive access to a FREE MP3 of Josh Brahm’s speech, “Nine Faulty Pro-Life Arguments and Tactics.”