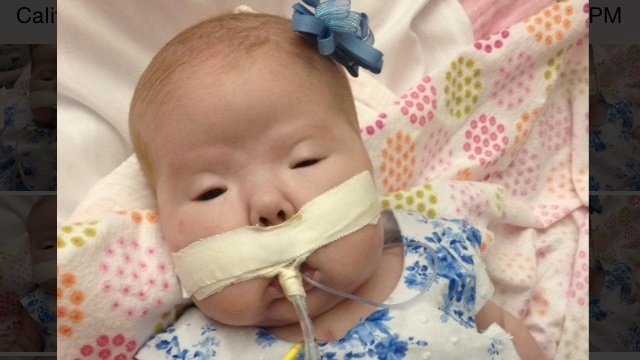 Stephanie Parra was told that her unborn daughter would likely not survive outside of the womb, so her doctor recommended abortion. She refused.

But months after her birth, her daughter Lily is still fighting to survive.

While she was still in the womb, Lily was diagnosed with a severe heart defect. The decision to not abort their baby was easy for the Parras: They believed that no matter how short Lily’s life would end up, her life was already too precious to them.

Despite her success so far, Lily’s fight just got a lot harder, and for unnecessary reasons. The News Observer reports that Lily Parra is being taken off the heart transplant list — not because she is too sick to benefit from it but because she also might have a developmental disability.

After doctors realized she would need a transplant and she was put through a battery of tests, she was put on the transplant list so she could get a healthy heart. But soon afterwards, they discovered her brain wasn’t growing as fast as they would have liked, and our doctors said they were taking her off the list because there was the potential for being “developmentally delayed”.

Parra is outraged at doctors essentially telling her that her daughter’s life is not worth saving, especially because she had been told this before. The Parras demanded that Lily be returned to the list, but they said the hospital ignored the plea.

The response they received was cold. They were told: “We won’t give her a heart. But we can make her comfortable.”

The Parras are reaching out to the public to fight for their daughter’s right to life. On Change.org, they have started a petition to put Lily back on the list for a heart transplant. On the petition, Parra says:

My daughter is a blessing, whether she has developmental issues or not. In fact, there are millions of parents just like my husband and I who can attest that their child is perfect and they wouldn’t have them any other way. The fact that someone is disabled doesn’t mean they are less deserving of a chance at life, and I refuse to let LLCH take that chance away from Lily.

Based on the overwhelming response so far, it seems that people think Lily deserves a chance at life, too.

ACTION: The petition to put Lily back on the list for a heart transplant can be found here.