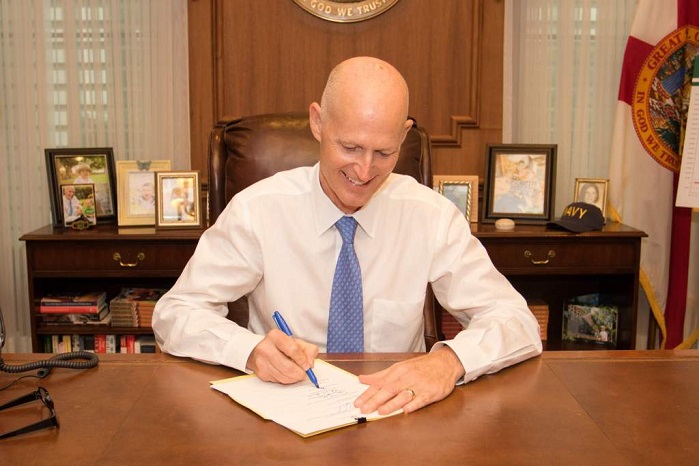 Florida Governor Rick Scott has signed a bill that would revoke taxpayer funding from the Planned Parenthood abortion business and any other clinics that also do abortions.

Earlier in March, the Florida Senate passed the bill, sending it to Scott’s desk. Like many other pieces of legislation introduced across the U.S. in recent months, the bill came in response to a series of undercover videos showing the Planned Parenthood abortion business selling aborted babies’ body parts.

The bill would defund the Planned Parenthood Florida affiliate of taxpayer dollars, and require abortion doctors to have hospital admitting privileges or patient transfer agreements. In addition, it would increase abortion clinic inspection requirements and licensing fees.

In Florida, the abortion group receives about $200,000 in taxpayer Medicaid funds every year, according to the Tampa Bay Times. The bill will redirect those funds to comprehensive health centers instead.

Not surprisingly the head of the nation’s biggest abortion business is not happy.

“This cruel bill is designed to rip health care away from those most at risk,” says Cecile Richards, president of Planned Parenthood Federation of America, in a statement. “…In their callous zeal to pass this legislation, politicians in Florida actually suggested that women could turn to elementary schools and podiatrists to seek the essential reproductive health care they would no longer be able to access at Planned Parenthood. At Planned Parenthood, we will not stop fighting for those patients who depend on us for care.”

“Abortionists will finally be held to the same standard as all other physicians who perform invasive procedures in a non-hospital setting by the requirement to have admitting privileges or a transfer agreement with a nearby hospital,” says Ingrid Delgado of the Florida Conference of Catholic Bishops. “It is incomprehensible that opponents suggest the bill makes women less safe.”

“This is a historic victory, and we are thrilled to have been an active part of this effort,” Stemberger said.

Abortion activists are considering a potential lawsuit against the new law.

“We’re evaluating all of our options and will do everything in our power to protect access to care,” said Laura Goodhue, executive director of the Florida Alliance of Planned Parenthood Affiliates.

“We pay their light bill, we pay their salaries, we pay all kinds of things when the state contracts with these clinics,” Bean said. “Let’s get Florida out of the abortion business.”

The Florida legislation would redirect the tax dollars to other non-abortion community health services, ensuring that women will have access to basic health services. Community health centers, which offer comprehensive health care to women and families, outnumber Planned Parenthood facilities by 20 to one.

“It is not a bill that restricts a woman’s right to choose … It’s getting the same level of care that she would have if she walked into any other clinic,” Stargel said.

Previously, an ACLU spokesperson said they would consider suing the state if the legislation becomes law. However, the spokesperson said it would depend partly on the outcome of another Florida law that the pro-abortion legal group is challenging. That law requires women to wait 24 hours before having an abortion. In February, the 1st District Court of Appeals ruled in favor of the pro-life law, allowing it to take effect, LifeNews reported.

The ACLU also could be waiting on the outcome of the upcoming U.S. Supreme Court decision on a Texas pro-life law that requires abortionists to have hospital admitting privileges and abortion clinics to meet the same standards as other outpatient surgical facilities. The Texas law is arguably responsible for saving the lives of tens of thousands of unborn babies by closing abortion clinics that are unable to protect women’s health.

The high court heard oral arguments on March 2 and is expected to announce its ruling in June.