A Purdue University staff member is being investigated after he allegedly threatened to rape pro-life women during an online debate about the campus pro-life club’s recent campaign.

The Purdue Students for Life group has been facing a heavy backlash this week after its members put up posters around campus that focused on how the abortion industry targets black women and their unborn babies for abortions. In coordination with Black History Month, the campaign posters read “Hands Up, Don’t Abort” and “Black Children are an Endangered Race” and included the hashtag #BlackLivesMatter.

UPDATE: Newman has resigned but refused to apologize.

Then on Wednesday, the team at Students for Life reported the discovery of a violent threat against pro-lifers by Purdue staff member Jamie Newman. Newman reportedly called for the rape of pro-life women in an online comment on Live Action News. 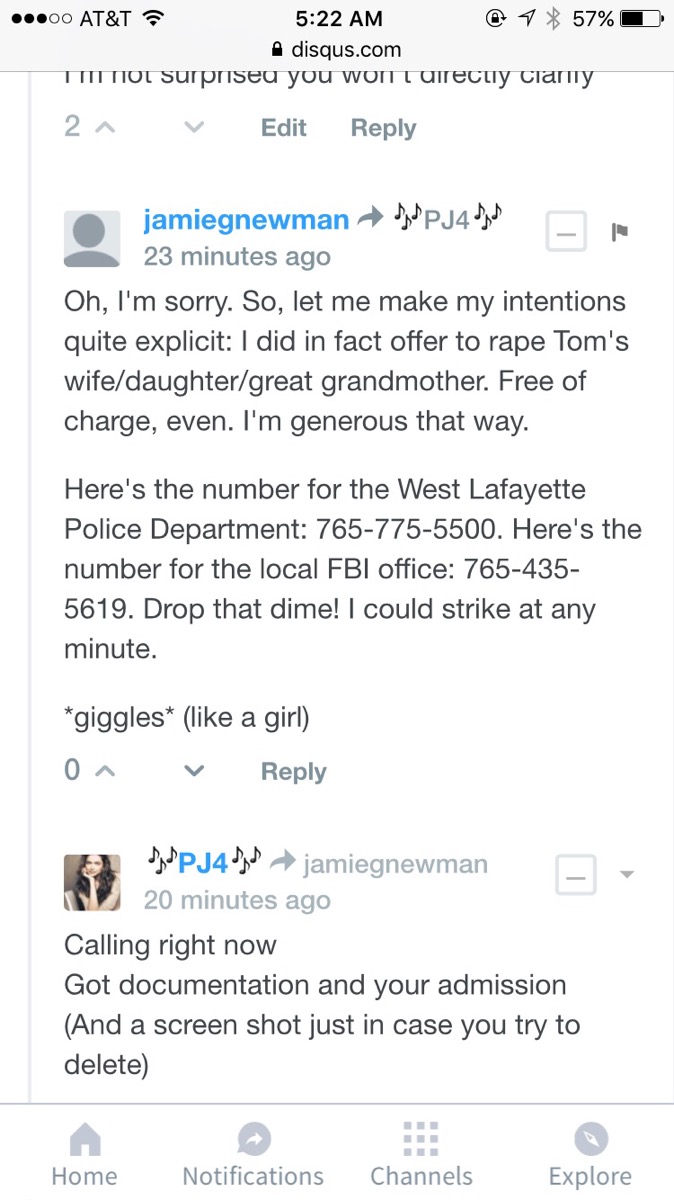 Newman also allegedly posted two comments on Feb. 4, according to screen shots by Students for Life:

“And that you should have pulled this stunt at the beginning of Black History Month suggests you are are either epically cluless or profoundly malicious. So which is is – embarrassingly dumb or simply evil?

The threatening comments have since been deleted, but Students for Life has screen shots of them on its blog. Students for Life said its staffers had been monitoring social media posts since the controversy began to ensure the safety of the students. Staffers said they were paying close attention to Newman after they noticed that he also attacked the Purdue Students for Life in a comment on Facebook last week.

“This is intolerable behavior, period,” said Kristan Hawkins, president of Students for Life of America. “Purdue must terminate their relationship with Mr. Newman now. For the past week, our students have been called ‘racists,’ ‘human garbage,’ and ‘ignorant c*nts.’ They have courageously stood their ground and have met with black students who were offended by their educational display to explain their event and ask for help for future events. But now the safety of our students has been put into risk. Purdue cannot let a staff member publicly call for the rape of their students no matter how unpopular their speech.”

The university said it is investigating Newman and his alleged threats of sexual assault against pro-lifers. Local news station WLFI reports police also are investigating.

Purdue Assistant Vice President for Strategic Communications Julie Rosa told Campus Reform: “Obviously, a threat of rape is outside the bounds of any definition of protected speech. Due process requires that, before taking any action, we verify the alleged facts and give this staff member the chance to explain himself if he can. Needless to say, the statements, as alleged, are reprehensible and unacceptable in the eyes of the entire Purdue community.”

Campus Reform also attempted to contact Newman but received no response. The news site said Newman’s Facebook page had been public, but after they reached out to him for comment, his Facebook page was change to private.

Newman, however, did speak with the Lafayette Journal & Courier Thursday, claiming that his comments were taken out of context. He said the allegations that he threatened to rape anyone were “false and defamatory” and “a complete fabrication.”

Students for Life said in a statement: “In our current time, Americans know that threats made online must be taken seriously. At Students for Life, we take this Mr. Newman’s words very seriously especially in light of the current controversy at Purdue, his previous posts, and the position of authority he has on the campus.”