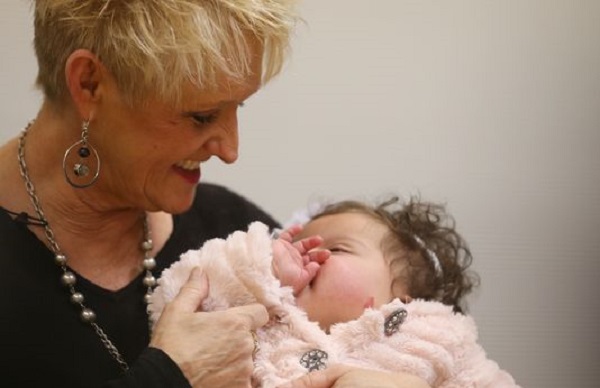 With nine teenage and adult children and three grandchildren, Dennis and Becky Zachary assumed that their home soon would be an empty nest.

The Ackworth, Iowa husband and wife are 58 years old, and they recently began making plans to retire, travel and visit their grandchildren.

But when Dennis, a doctor, helped one of his patients deliver a baby with Down syndrome, he and his wife were faced with a new opportunity to become parents again. And they said yes.

The Des Moines Register reports that Dennis began seeing a 17-year-old pregnant patient about a year ago at his Mercy South Family Practice. The teen decided to make an adoption play for her baby and found a couple in California who wanted to adopt, according to the report.

But when baby Olivia was born, Dennis noticed that she had Down syndrome. When the California couple saw Olivia at the hospital and learned about her genetic disorder, they backed out of the adoption and left the young mother and baby with no where else to turn.

“She didn’t even have a onesie,” Dennis said. “She didn’t have a car seat. She was not ready for the responsibility of a baby, let alone a special-needs child.”

“At some level, I can understand not wanting to adopt a baby with Down syndrome, but they could have at least left some clothes or a car seat for the mom,” he continued.

The Zacharys had adopted four of their nine older children. So, when they learned about the situation with Olivia, the couple prayed, discussed the situation and decided to adopt her into their family, the report states.

The newspaper reports more about the family’s story:

Dennis isn’t sure how the 17-year-old from southern Iowa was referred to his south Des Moines clinic.

He describes her as a bright and thoughtful young woman who plans to go to college. Dennis was delighted to hear her stories of the California family who planned to adopt her child. They sent the girl gifts.

“She was excited to give the gift of this baby to this family,” Dennis said.

The day Olivia was born, Becky and Dennis planned to travel to Ames to watch their son Jacob at an Iowa State University football camp.

The delivery was smooth. But the moment the child was born, nurses whisked Olivia away.

It was odd. The adoption was going to be open. Usually babies stay with the mother after delivery.

Dennis went to check on the newborn and saw she had Down syndrome.

He knew it was going to be a long conversation. He left for the day. He and Becky drove to Ames to Jacob’s event.

Becky asked how the delivery went.

“But what?” Becky asked.

“The girl has Down syndrome,” Dennis said. “I hope everything works out with the adoption.”

Becky felt a familiar tug in her heart, that feeling Dennis believes is a calling from God.

“If it doesn’t work out,” Becky said, “we should adopt that girl.”

Dennis shook his head in disbelief. Was this the same Becky who was ready to be done with parenting now volunteering to take on a special-needs child?

He smiled. He knew, too, that it was right.

“God is calling us again,” Dennis said. “I’d better go along for the ride.”

Before making a decision, the couple said they consulted with their families, who had cautioned them about their previous adoptions; but they received nothing but encouragement.

The Zacharys said they also met with the biological mother and grandmother of Olivia, who were “delighted” that they wanted to adopt her.

Now, Olivia is 6 months old, and she is officially the 10th member of the Zachary family. Becky said Olivia is behind developmentally, but they take her to physical therapy regularly. The family said they work with her continuously to help her develop cognitive skills.