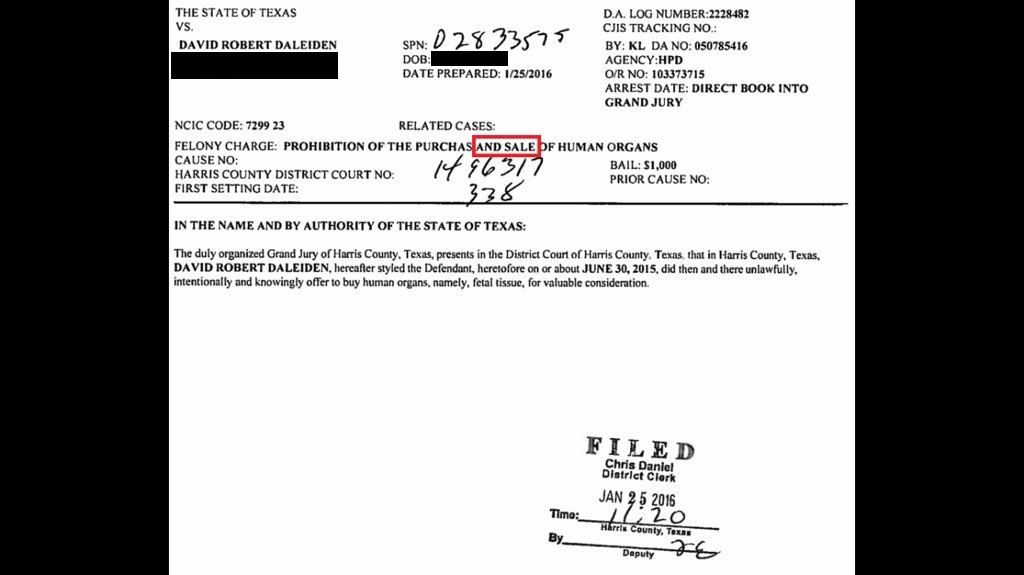 The document filed with the courts charging pro-life advocate David Daleiden with breaking a law prohibiting the the purchase and sale of human organs lists David Daleiden as attempting to buy and sale the body parts of aborted babies. The only problem is Planned Parenthood was the entity offering to sell aborted baby parts, not Daleiden.

Below is a copy of the charge against Daleiden. Why Daleiden is charged with selling human organs and not Planned Parenthood is the subject of considerable debate now.

Peter Breen, a lawyer with the Thomas More Society who also represents Daleiden in civil litigation, says the charges are bogus.

“We have very strong defenses, and neither of these two laws fit what David Daleiden and his undercover team did,” said Peter Breen, a lawyer with the Thomas More Society who also represents Daleiden in civil litigation. “That procurement statute requires intent, and everyone in the country knows David Daleiden had no intention to buy baby body parts, while Planned Parenthood had the repeated intention to sell baby body parts and adjusted their procedures to harvest better body parts.”

Another of the pro-life attorneys defending Daleiden, Tom Brejcha, Thomas More Society President and Chief Counsel, says the lawsuits and other attacks Daleiden is facing are a part of the campaign to shut down his expose’ of Planned Parenthood.

“Planned Parenthood and NAF are working to shut down Daleiden’s investigation of the abortion groups’ involvement in baby parts trafficking. But equally as any other investigative journalist working for ABC, NBC, CBS, Fox News, or your local print or electronic media outlet may regularly resort to undercover journalism tactics to ferret out hidden crime, so too David Daleiden should have the right to penetrate the criminal underworld of America’s abortion providers and report all the evidence he has uncovered of criminal wrongdoing to law enforcement and to members of the public,” he says.

Brejcha says Planned Parenthood alleges that Daleiden’s investigation was a “criminal enterprise” and thus tries to de-emphasize the fact that Planned Parenthood’s own top doctors have been caught in the horrific, criminal activity of aborted baby parts trafficking.

Daleiden and Merritt were charged with one felony related to tampering with a governmental record and a misdemeanor count for violating the Texas statute on human organ trafficking for allegedly offering to buy fetal tissue.. The felony charge was in reference to the use of a fake ID. If convicted, Daleiden faces 20 years in prison while Planned Parenthood officials face no legal consequences for their actions.

The tampering charge has to do with the CMP investigators’ use of fake IDs to gain access to confidential meetings and events with top Planned Parenthood officials for the purposes of exposing their purchasing of aborted baby parts. This is the same charge that would be leveled at a minor who made or bought a fake ID to buy alcohol, except the minor would be breaking that law and David wasn’t engaging in an illegal activity with the fake ID.

The charges elevated to felonies because the grand jury alleges the IDs were used “with intent to cause harm” to Planned Parenthood. Under Texas law, the charge carries a penalty of two to 20 years in prison.

But Planned Parenthood is doing the lawbreaking it appears.

In the video Daleiden and his team filmed in Houston, Melissa Farrell of Planned Parenthood-Gulf Coast in Houston boasted of Planned Parenthood’s skill in obtaining “intact fetal cadavers” and how her “research” department “contributes so much to the bottom line of our organization here, you know we’re one of the largest affiliates, our Research Department is the largest in the United States.”

Asked specifically if this means Planned Parenthood Gulf Coast can change abortion procedures to supply intact fetal specimens, Farrell affirms, “Some of our doctors in the past have projects and they’re collecting the specimens, so they do it in a way that they get the best specimens, so I know it can happen.”

The investigators ask Farrell how she will frame a contract in which they pay a higher price for higher quality fetal body parts, and she replies, “We can work it out in the context of–obviously, the procedure itself is more complicated,” suggesting that “without having you cover the procedural cost” and paying for the abortion, the higher specimen price could be framed as “additional time, cost, administrative burden.”

Farrell finally summarizes her affiliate’s approach to fetal tissue payments: “If we alter our process, and we are able to obtain intact fetal cadavers, we can make it part of the budget that any dissections are this, and splitting the specimens into different shipments is this. It’s all just a matter of line items.”

Farrell also indicates to the investigators over lunch that the specimen sales from her department contribute significantly to Planned Parenthood Gulf Coast’s overall finances: “I think everyone realizes, especially because my department contributes so much to the bottom line of our organization here, you know we’re one of the largest affiliates, our Research Department is the largest in the United States. Larger than any the other affiliates’ combined.”