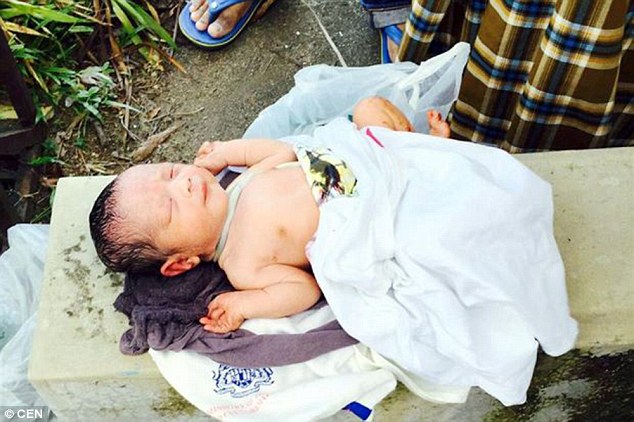 When churchgoers in Malaysia heard small cries near their building, they thought a kitten was stuck in a drain.

As they walked closer, much to their surprise, the churchgoers discovered a newborn baby boy with his umbilical cord still attached inside a plastic bag near the drain, The Daily Mail reported Monday.

The news report provides more details about the situation in the town of Bandar Baru Bangi, located on the west coast of the Asian nation:

The newborn was covered in his own faeces and wrapped in a grey shirt inside the bag.

Local police spokesman, Willey Richard, said the man who had found the baby had initially thought the cries were coming from inside the drain.

According to the spokesman, he had then seen something moving in a bag next to it and decided to opened the plastic bag and saw a baby inside.

The baby still had its umbilical cord attached and a police patrol team arrived shortly after to take the baby to the Kajang Hospital.

Police said the boy is healthy and are calling on the public to help identify and locate the child’s parents.

Many countries are moving to address the problem of infant abandonment and infanticide. Some European countries, including Russia, Poland, Germany and the Czech Republic, have baby boxes, or “hatches,” where desperate mothers can abandon their babies and allow others to care for them. In South Korean, a pastor built a “baby box” on the side of his home to collect and care for babies who are physically or mentally handicapped or are just unwanted. His story gained international attention through the film “The Drop Box.”

American states address the problem of infant abandonment with safe haven laws. These provisions allow mothers who cannot care for their newborn babies to drop them off with no questions asked at hospitals, fire stations or police stations to be cared for by authorities until a home can be found.

As LifeNews previously reported, Monica Kelsey has been is a big supporter of safe haven laws because she was safely abandoned at a hospital in Indiana in 1973. Kelsey has been working tirelessly to bring “baby boxes” to the United States, which are climate controlled devices that allow women to relinquish their child completely anonymously without even seeing another person.