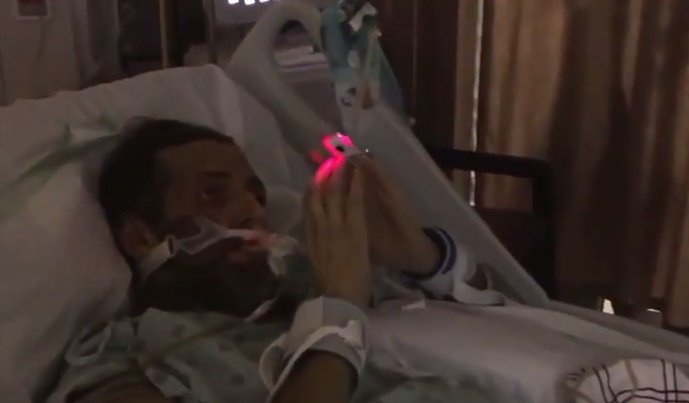 A Houston, Texas man who was shown in a shocking video begging and praying to stay alive has died after his family battled hospital officials who wanted to pull the plug on him without his or their consent. Chris Dunn had received national attention over a video showing him begging and praying to stay alive and to not have Methodist Hospital remove his life-sustaining medical treatment that it wanted to remove.

Methodist Hospital had invoked the statutory process found in the Texas Advanced Directives Act (TADA-Chapter 166.046 of the Health & Safety Code), which allows the hospital to override medical directives of a patient and provide only ten days’ notice before involuntarily withdrawing life-sustaining treatment.

Even if a patient is conscious, able to communicate, walk, or pay for his own care, Texas law authorizes hospitals and physicians to override the medical decisions of a patient and remove care, including food and water, after providing the required ten days’ notice.

Officials with Texas Right to Life kept LifeNews.com informed of the battle and their efforts to help Dunn’s family employ its only recourse: to find another facility that would offer him an ICU bed. Bobby Schindler, Terri Schiavo’s brother and a LifeNews blogger, had also been working with the pro-life group to assist Dunn and his family.

Sadly, before the pro-life group had a chance to get Dunn to a hospital that would provide him appropriate medical care and treatment, Dunn passed away. He died around 6 a.m. local time on Wednesday.

Medical experts did not expect Dunn to live long and thought the family needed to explore end-of-life options, but a compelling cell phone video had pro-life activists shouting otherwise.

Dunn’s family used a YouTube video to argue that he can communicate.

“You can ask him questions. Yes or no. He’ll answer nodding yes or no,” Dunn’s sister, Holly Gomez, said.

She said her brother was a healthy 46-year-old whose life took a nose-dive in October.

“There was no definitive diagnosis of what was wrong with him, outside of there’s a mass on his pancreas,” Gomez said.

Texas Right to Life released an image of Dunn along with a statement from his mother after his passing: The pro-life group responded to the news of Dunn passing away:

We commend Chris’s mother, Evelyn, and the other family members who labored tirelessly to protect Chris from death imposed by the hospital and legally sanctioned by the draconian Texas Advance Directives Act.  Through Chris’s illness and disability, Evelyn never lost sight of the value of Chris’s life.  Texas Right to Life is honored to have played some small role in comforting Chris and Evelyn as they endured this tragic circumstance.

In the wake of Chris’s passing, Texas Right to Life will continue to challenge the unconscionable state law that allowed doctors to deem Chris’s life “futile” and continues to jeopardize the lives of countless other hospitalized patients in Texas.  The legal efforts of Chris’s family and his lawyers to stall the state-sanctioned, involuntary euthanasia proved effective.  Not only was Chris’s death not imposed by the hospital, but he and his family also raised unprecedented awareness of the unconstitutional and unjust nature of the Texas Advance Directives Act.

Throughout his lengthy ordeal, Chris and his family conveyed gratitude for the assistance of Texas Right to Life and the dedication of our supporters who rallied behind Chris’s cause.  Until the very end, we worked together to do everything possible to ensure justice for Chris.  Although the hospital refused to treat Chris’s illness based on a discriminatory “quality of life” judgement, Evelyn and Chris’s family take solace in the fact that Houston Methodist continued life-sustaining treatment and cared for him in his final days.

Dunn is one of countless Texans who have been victimized by the draconian Texas Advance Directives Act (TADA), enacted by the Texas Legislature in 1999.  The law – which benefits the medical lobby and jeopardizes medically vulnerable Texans – protects the financial and discriminatory interests of hospitals and physicians by abrogating the civil liberties of patients.

As Texas Right to Life explains about the law: “When a hospital or physician determines for any reason that they disagree with a patient’s decision about his or her own medical treatment and invokes TADA, Texas law protects those healthcare providers as they remove life-sustaining treatment from the patient even when doing so means overriding the patient’s desire and right to live—and even when the treatment is benefitting the patient.  The law does not require that the hospital inform the patient or family about the reasons or basis for the removal of treatment, which could include financial reasons, discrimination, or subjective quality of life value judgments about the life of the patient.”

The pro-life group will continue working to amend or replace the law to provide adequate care for disabled patients like Dunn.