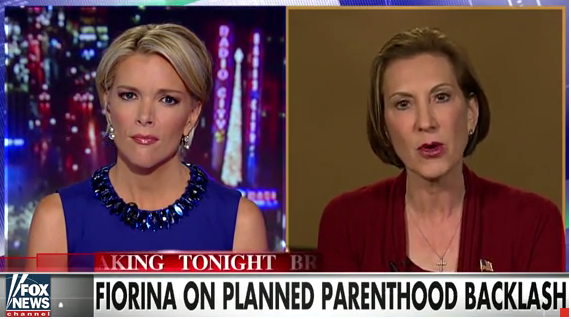 Republican presidential candidate Caryl Fiorina, in an interview last night on Fox News, worked to refocus the abortion debate back on abortion and unborn children and to remind people how Planned Parenthood has been caught selling the body parts of aborted babies.

Here’s the transcript and video of her interview with Megyn Kelly:

KELLY: “One of the things that they don’t want to be discussing is that the Planned — they are saying the Planned Parenthood videos have been debunked, they have been discredited, they were manipulated I suppose. I just want to show the audience — time has passed. This is what got people so upset about these videos. These are two examples. Watch.”

KELLY: “Do you ever feel like the outrage is saved up for people like you who have sincerely held beliefs, it’s saved up as opposed to trying to understand why about half the country has a real problem if not with the abortion procedure, which does stop a beating heart, then with the callousness with which those women discussed it, which was so bad the president of Planned Parenthood had to apologize for it.”

FIORINA: “Isn’t that the case? Isn’t it also true if you look at every pole, what you will find is the majority of women, the majority of young people, the majority of Americans now believe that abortion for any reason at all after five months is wrong. I will call on the senate once again to pass the pain capable unborn child protection act. i will ask all Americans who are wondering what this outrage is about to examine what the left wing’s policy on abortion is. here is their policy. Here is their platform. It is not a life until it is born. Most Americans disagree with that.”