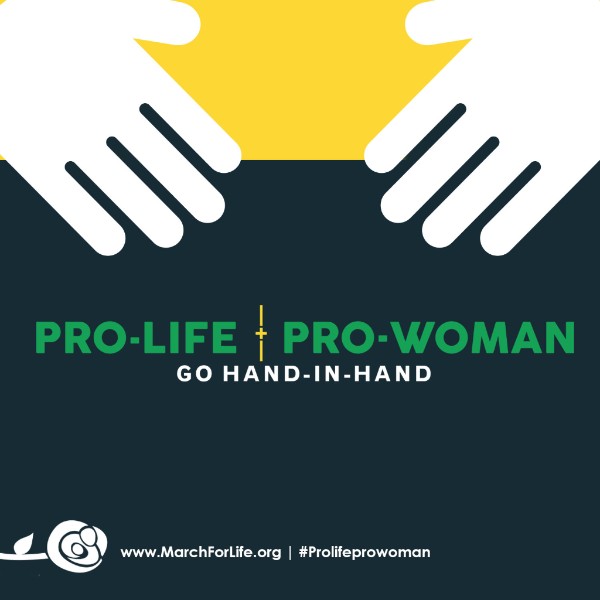 This year’s March for Life will take on the War on Women claims abortion advocates and Democrats have used to falsely portray pro-life advocates as anti-women simply because they support the right to life of unborn children.

Two months before their annual rally against the Roe v. Wade ruling, organizers of the March for Life will lift the curtain on their 2016 theme, “Pro-Life and Pro-Woman Go Hand in Hand,” at a Capitol briefing.

Geared toward Hill staffers who oppose abortion from either side of the aisle, Wednesday’s lunchtime event will encourage attendees “to be bolder on the issue of life,” said Tom McClusky, vice president of government affairs for the March for Life Education and Defense Fund.

Staffers will learn tips to help their bosses “counter the false narrative of, ‘being pro-life means you’re anti-woman,’” McClusky said, adding that he expects a “war on women” narrative to resurface as the presidential race gains speed.

“We are announcing the theme at the U.S. Capitol as we speak at a briefing we are hosting with pro-life and pro-woman friends and allies,” March for Life director Jeanne Mancini told LifeNews.

“Why this theme, why now? Each year, we try to discern the most cutting edge and critical theme for the March for Life, as well as the area that needs the most education,” she explained. “It has been said — politically and culturally — that for one to be pro-woman one must be pro-choice. But nothing could be further from the truth. Sadly, there are so many confusing messages regarding women and the issue of abortion, compounded by the false “war on women” rhetoric.”

“The truth is that life is the empowering choice for women. It’s best for women and families facing unplanned pregnancies, and it’s best for developing female babies in the womb. Abortion harms women, and affects our society as a whole, in so many ways,” Mancini continued. “Through our 2016 theme, “Pro-life and Pro-Woman Go Hand-in-Hand,” we will explore this topic in many ways, and we will push back against the Planned Parenthood machine.”

An emphasis on the pro-woman, pro-life perspective is important given that pro-life advocates will likely be facing the prospect of pro-abortion presidential candidate Hillary Clinton as the Democratic nominee — the first female presidential nominee from either party. Clinton is already throwing out the gender card and claiming she is facing sexism as she faces pro-abortion Democrat Bernie Sanders.

The evidence this time is courtesy of her only substantive rival: the hapless Democratic Socialist Senator from Vermont, Bernie Sanders. Here’s the lead from a story in POLITICO written by Annie Karni:

The once respectful Democratic primary has devolved into a slugfest about gender, with Hillary Clinton surrogates expressing outrage over how Bernie Sanders is conducting his campaign – even calling for him to fire his staff over alleged sexist remarks.

According to Christine Quinn, “the former New York City Council speaker who sits on Clinton’s New York Leadership Council and fundraises for her campaign,” she was “stunned that a man like Bernie Sanders, who has clearly committed his life to making the country a better place, would get sucked into this very dangerous rhetoric, which perpetuates sexist and misogynistic stereotypes.”

Quinn, who ran for New York City mayor in 2013, said a recent Bloomberg Politics story that quoted Sanders campaign manager Jeff Weaver joking that “we’re willing to consider her for vice president…we’ll even interview her” was beyond the pale.

“Seriously? Seriously? The absurdity of that statement almost merits no response. How arrogant and sexist can you be? It’s not OK to let people with a long progressive record get away with being sexist.”

The big question for Clinton will be just how extreme she will go on abortion. She’s already been protecting Planned Parenthood after it was exposed selling aborted baby parts.