Every five year the Netherlands has a meta-analysis euthanasia study. In 2010 the Lancet study indicated that 23% of all assisted deaths were unreported in the Netherlands. 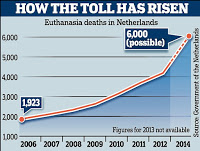 The number of assisted deaths in the Netherlands continues to increase.

Whereas assisted dying in the beginning was the odd exception, accepted by many — including myself — as a last resort… Public opinion has shifted dramatically toward considering assisted dying a patient’s right and a physician’s duty. A law that is now in the making obliges doctors who refuse to approve assisted dying to refer their patients to a willing colleague. Pressure on doctors to conform to patients’ or relatives’ wishes can be intense.

Other developments have taken place as well. The Dutch Right to Die Society founded a network of traveling euthanizing doctors, thus taking assisted dying out of the patient-doctor relationship. There is a strong public movement toward legalizing euthanasia for children 1 to 11 years of age. Whereas in the first years hardly any patients with psychiatric illnesses or dementia appear in reports, these numbers are now sharply on the rise. Cases have been reported in which a large part of the suffering of those given assisted dying consisted of being aged, lonely or bereaved.

A recent study examining the first year at the Netherlands euthanasia clinic found that “tired of living” and dementia were common reasons for euthanasia. The study found that:

The Netherlands euthanasia clinic has also been implicated in several controversial deaths:

On February 6, the Supreme Court of Canada struck down Canada’s assisted suicide law and in its decision it used language that would allow euthanasia.

The Netherlands experience with euthanasia is frightening. The Canadian government must either use the notwithstanding clause to prevent the legalization of euthanasia or to pass new legislation that is designed to make euthanasia and assisted suicide non-existent.