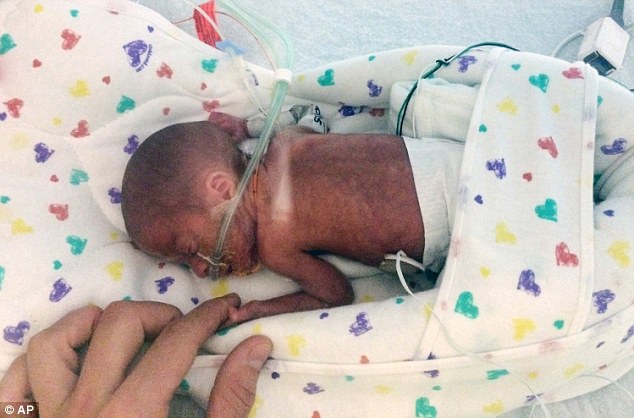 A woman from Utah unexpectedly gave birth to a one-and-a-half pound baby boy three months early while on a cruise in the eastern Caribbean.

The Daily Mail reports that Emily Morgan credits the survival of her son, Haiden, to strong lungs, a makeshift incubator and an early arrival in Puerto Rico. Now he is expected to survive but will stay in a Miami neo-natal unit until December. However, his family hopes he will be strong enough to transport to Utah in October and be united with his older sister, Chloe.

Emily explained that her doctor approved her family’s trip to the Caribbean to celebrate her daughter’s third birthday but when she started having intense contractions on August 31st she knew something was wrong. Initially, she thought it was false labor but when she and her husband spotted blood they called for medical staff on the ship.

Prior to the delivery, a doctor aboard the ship told her she couldn’t give birth because they were still 14 hours from the nearest port and her baby would not survive; but Emily knew there was nothing she could do to delay labor. She said, “I knew the baby was coming. I had felt him kicking. I felt the process of him getting bigger.”

Then, after giving birth, doctors on the ship told her that she miscarried and that she should get some rest. Emily refused and said she wanted to see her baby regardless of what condition he was in. She said, “I’m going to see him, I don’t care if he’s alive or if he’s dead.” Her son was brought to her wrapped in towels and wearing an oxygen mast on his face. “He was crying, like a little feeble cry,” Emily explained.

Remarkably, the medical staff and Emily were able to create a makeshift incubator out of microwaved saline packets. Additionally, they used napkins to keep his head warm and did not touch his skin. The captain of the ship speed toward Puerto Rico and they arrived two hours early. It is possible that Haiden would have not survived if they arrived any later because black spots were beginning to appear on his fingers, which was a sign that his circulation was starting to fade.

According to Dr. Bradley Yoder, medical director of the newborn intensive care unit at the University of Utah, babies like Haiden who are born so early and so far a hospital have a less-than-10 percent chance of survival. He explained that preemies are usually brought into the intensive care unit immediately after birth and given medication to help them breathe. He said, “I’m surprised the baby survived, to be honest.”

Currently, Haiden is improving and being fed breast milk two tablespoons at a time through a syringe into a tube in his stomach. Although Emily was frustrated with the medics aboard the ship for not letting her see her son right away, she understands that they were trying to protect her.