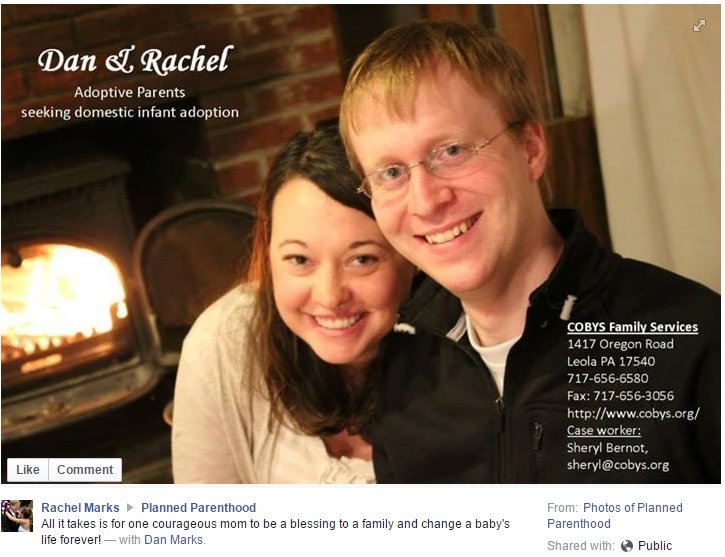 Liberal priorities are so freaking screwed up.

One of the things that absolutely do not understand about proponents of abortion (other than how they can in good conscience support the systemic murder of unborn children) is how hostile they are to the idea of adoption. Hundreds upon thousands of couples would gladly adopt a baby and give that child a loving home, if given the chance.

But you can’t suggest that in front of someone who is pro-abortion – you know, the same people who scream about “MY BODY, MY CHOICE!!!” You say the dreaded “adoption” word and it’s like you suggested murdering someone, the way they react sometimes (oh, the irony). At the same time, pro-abortion groups often sneer at pro-lifers saying that they should adopt all the babies that would otherwise be aborted, if we cared about life so darn much.

But even then, there is no winning with these monstrous baby butchers.

Case in point – A clever and competent reader sent us a link to this Facebook thread. Dan and Rachel Marks decided to post a photo on Planned Parenthood’s Facebook page, saying they are looking to adopt a child. The photo includes their adoption agency’s contact information saying “All it takes is for one courageous mom to be a blessing to a family and change a baby’s life forever!” They aren’t getting in anyone’s face, they aren’t being rude – they’re just hoping that one woman who may be considering getting an abortion will realize that there are other choices available to her and might decide to get in contact.

Pro-life belief in action – love it!!

But to read the Facebook comments, you’d have thought Dan and Rachel Marks were proposing rounding up pregnant women against their will and stealing their unborn children for fun and profit (*cough, cough* sixth Planned Parenthood video *cough*). Here is just a sample of the super-tolerant progressive left at work – What I’ve always found “funny” (for lack of a better term) about the “Planned” part of “Planned Parenthood” is that “planning” indicates that there are decisions and choices to be made. Which means there are options. Instead of just saying “Oh, abortion’s the only thing you can do,” you’d think an organization that uses the word “plan” to describe itself would be honest about the choices a woman has – including adoption. But nope, you walk into Planned Parenthood, you’re pretty much guaranteed an abortion. No planning necessary.

LifeNews Note: Chrissy Johnson writes for Chicks on the Right, where this column was originally published.