Today the Center for Medical Progress released the sixth video exposing Planned Parenthood’s participation in the trafficking of fetal parts. This video is actually the second installment in the CMP’s Human Capital documentary series.

This video features Holly O’Donnell, former procurement technician for StemExpress who was first introduced to us in Episode 1 of the documentary series. Holly relates her often horrific experiences at Planned Parenthood where she procured fetal tissue and maternal blood for StemExpress. The episode focuses on the callous exploitation of women by Planned Parenthood and StemExpress and a shoddy consent process that sometimes allowed for the stealing of baby parts without the mother’s consent or knowledge.

“Holly O’Donnell has given us a window into the dark truth that goes on in Planned Parenthood clinics, where there is a monetary incentive to push abortions on conflicted women,” said Troy Newman, President of Operation Rescue who also serves as a Board Member for the Center for Medical Progress. “The human misery that is inflicted on women by Planned Parenthood and their body parts partner StemExpress is reminiscent of butchers chopping meat and selling it by the pound. We should all be disgusted by this greedy exploitation of vulnerable women and their babies that we should not rest until Planned Parenthood’s grisly baby parts market is defunded, stripped of their tax-exemption, and ultimately shut down for good!”

O’Donnell related how she identified patients who had to potential to produce fetal specimens that were in demand, then would seek opportunities to “consent” them. StemExpress used a separate consent from Planned Parenthood’s abortion consent that indicated women would not be reimbursed or compensated for the remains of their babies.

While Planned Parenthood has maintained that women are consented for the “donation” of their babies only after they consent to abortions, O’Donnell experienced something quite different.

Sometimes women had just received pregnancy tests and had not even made a decision to abortion before the StemExpress representatives attempted to obtain consent for their fetal remains.

There were times when procurement technicians would just take what they wanted without consent, especially if a later pregnancy was involved.

“It’s terrifying,” O’Donnell related. “Like, imagine if you were an abortion patient and someone was going in and stealing your baby’s parts. And half these women are already on edge as it is.” 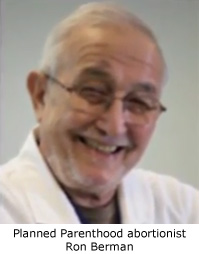 O’Donnell related how one Planned Parenthood abortionist, Ron Berman, has a reputation for being “visciously fast” at doing procedures. Often the specimens they expected to collect were ruined during his rushed abortions. She described how he would pace and become anxious if there was some delay between abortion patients, as if he could not wait to kill the next baby.

O’Donnell would sometimes tell women who were conflicted about their abortions to “run” or “go home” because of the horrific treatment that was inflicted upon women at Planned Parenthood. For that, she would often get in trouble for not “taking advantage of the opportunity.” The attitude was one of cold uncaring. It was all about the money.