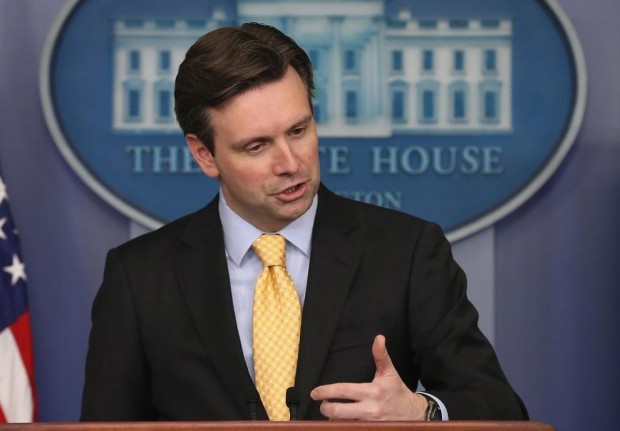 During the exchange with reporters (see video below), Earnest admitted the Obama administration is just reading off the talking points from Planned Parenthood:

“Would it be unfair to say that you’re simply taking your talking points from Planned Parenthood on these videos?”

“I would suggest you talk to Planned Parenthood.”

The Hill has more about Obama’s spokesman’s comments:

White House press secretary Josh Earnest stopped short of issuing a formal veto threat against the legislation, but he said “on balance, the president would not be supportive of such congressional action.”

“This is a tactic we have seen used before,” Earnest said of the GOP legislation. “The president obviously does not support that ongoing effort.”

The spokesman accused Republicans of trying “to play some politics with some selectively edited videos” and said they were released in a “fraudulent way.”

Earnest also said he is not sure if President Obama has seen the videos, but added he is following the story in the news.He had no specific comment on the footage, other than to suggest the footage was selectively edited.Earnest said the” fraudulent way” the videos were released means there is “not a lot of evidence” Planned Parenthood violated their own standards and rules.

Asked how he knows the videos are fraudulent, Earnest said he was relying public statements made by Planned Parenthood.

Carol Tobias, the president of National Right to Life, disagrees.

“The chirpy nonchalance with which these Planned Parenthood executives talk about dismembering and pricing unborn children is both sickening and deplorable,” she told LifeNews.

In the video, actors posing as representatives from a human biologics company meet with Ginde at the abortion-clinic headquarters of PPRM in Denver to discuss a potential partnership to harvest fetal organs. When the actors request intact fetal specimens, Ginde reveals that in PPRM’s abortion practice, “Sometimes, if we get, if someone delivers before we get to see them for a procedure, then we are intact.”

“We’d have to do a little bit of training with the providers or something to make sure that they don’t crush” fetal organs during 2nd trimester abortions, says Ginde, brainstorming ways to ensure the abortion doctors at PPRM provide usable fetal organs.