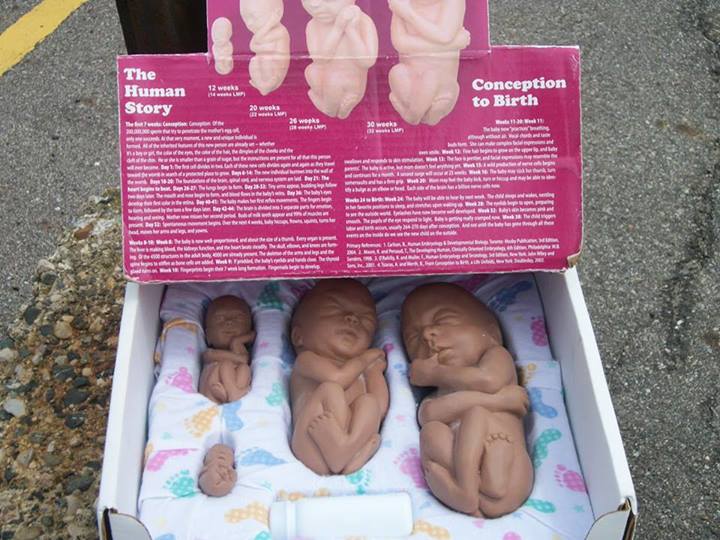 I will never forget an evening a few years ago when I sat with another volunteer at the Washington County Right to Life fair booth. There weren’t many people at the fair that night and I was a little frustrated, feeling as if I was wasting my time. Someone else could be doing this, I thought. I should be back at the office coordinating many larger ORTLEF fair projects.

Then, a young woman approached to thank us for having a booth because if it hadn’t been there the year before, she wouldn’t have had her son, Sean. She showed us her four-month-old baby.

In 2013, a young woman came to the Deschutes County fair in Bend to thank the local chapter, Central Oregon Right to Life, for having their booth. She had decided to keep the baby she was carrying because of seeing their display the year before.

At a fair on the coast, a pregnant girl who had an appointment for an abortion in Portland came by the fair booth and saw the baby models and video showing an unborn baby moving around in the womb. She took a StandUpGirl card and visited the website when she got home. The booth display and the StandUpGirl website saved her son’s life. He is now in middle school, has dark eyes and dark, curly hair.

A couple years ago, while we were setting up our State Fair booth in Salem, a gentleman who had a booth in the same building told me that a woman had been looking at his display. He noticed one of the 10 to 12-week pre-born baby models we give away at our booth lying on the table near her and asked if it belonged to her. She replied, “No, but I saw one of those at a booth last year when I was at that stage of pregnancy. I decided not to have an abortion.”

Many people have mentioned that if it weren’t for our booth, their grandchildren would not be alive.

In 2008, a young pregnant woman who believed the pregnancy would ruin her life stopped by our booth with her mother. They looked at the fetal models and watched the video and the woman became more peaceful and eventually a little excited about being pregnant. Later, the family stopped by to say the woman had decided to have her baby.

Abortion numbers are going down all over the country, even in a radically pro-abortion-minded state li9ke Oregon. Pro-life people all over the state are making that possible. Would you consider volunteering at a booth and being a part of the movement in Oregon?

LifeNews Note: Kate Ewald is the education director for Oregon Right to Life.