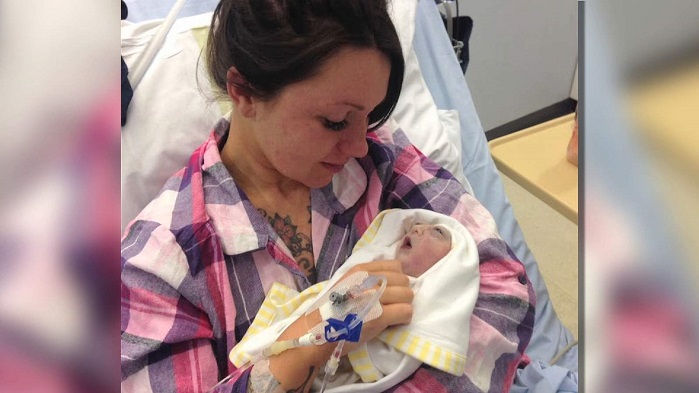 The parents of Baby Teddy Houlston were given a diagnosis of anencephaly 12 weeks into their pregnancy.    This condition prevents the brain and skull of the baby from developing and in many cases, babies diagnosed with anencephaly die in the womb, are stillborn or live for a short time after birth.

Teddy’s mother, Jess Evans, was carrying twins when she and Teddy’s father, Mike Houlston, were given the devastating news. Ms Evans told the Daily Mirror newspaper that the diagnosis was “soul-destroying”.

In the UK, abortion is allowed for the duration of pregnancy if the baby is diagnosed with any kind of disability, so Teddy’s parents were offered an abortion.  Explaining why they refused this, Ms. Evans told the newspaper:

“We thought that even if we had a moment with him, or 10 minutes, or an hour, that time was the most precious thing that we would ever experience.”

Having made this life-affirming decision, Teddy’s parents then made the unbelievably generous commitment to donate their baby’s organs.

Speaking about this decision, Teddy’s mother said: “Organ donation was something I’ve always felt strongly about ever since I was a child.”

Teddy’s father said that at first, they did not think that a transplant would be successful because it had never been done before. Teddy was born at the University Hospital of Wales, Cardiff.  He passed away 100 minutes later and within minutes doctors had carried out the pioneering surgery which led to his kidneys being used to save an adult’s life in Leeds.

Speaking of their joy at the news, Teddy’s parents said that they wanted people to see their son’s face and hear about the incredible gift he had given during his short life.

Mr.  Houlston said “We never doubted him.  He lived and died a hero.  It’s impossible to explain how proud we are of him.”

“He is still very much a part of our family today, we talk of him every day, our children talk of him, our families do, we always remember him, he is with us all the time,” Ms Evans added.

The success of the transplant “helped us grieve”, she said, adding: “Knowing that he was able to do such good, more good than most of us will ever do in our lifetime – it is just overwhelming how proud we are of him.  We hope Teddy’s story will inspire families who find themselves in the position of losing a child.”

Had he lived, Teddy would have been one year old on April 22nd.  On his birthday, his parents visited his grave with Teddy’s surviving twin, one-year-old Noah.

This is the first time that organs have been donated from a baby suffering with anencephaly, and specialists are hopeful that more surgeries like this will happen in the future.

A specialist nurse who worked on the team that monitored Teddy before his birth and during the transplant described it as “challenging”.  She said that being present throughout Teddy’s life was “a privilege”, adding that his life was “an hour-and-a-half of pure joy”.

Angharad Griffiths said that there was naturally some sadness in the room as Teddy’s parents knew that they were going to him.

Teddy’s story is a reminder to all those who support abortion in cases where babies are diagnosed with life-limiting conditions that there is a better way – one where parents can get to spend time with their baby and even make the courageous decision to donate their baby’s organs and allow him or her to save another human life.