For the third time in just two months, abortionist Karen Mann has sent a patient to the hospital to receive emergency care. Witnesses to the April 14, 2015, incident told Operation Rescue that this time the woman appeared “lifeless.” “Her arms were just hanging lifeless off the sides of the gurney,” reported Terri Palmquist of Life Savers Ministries. Palmquist is a long-time sidewalk counselor outside FPA Women’s Health, formerly known as Family Planning Associates, in Bakersfield, California. “She was at least unconscious.”

Palmquist explained that nearly every clinic worker emerged from the abortion facility with sheets that were deployed in an effort to block pro-life activists from photographing the incident. However, Palmquist’s husband, Tim, got a very good view of the obviously unconscious woman.

The woman was rushed by ambulance running lights and sirens to Memorial Hospital in Bakersfield. Her condition today is unknown.

Mann has worked at FPA Women’s Health in Bakersfield for only about three months but has so far sent three women to the emergency room for care she was incapable of providing. 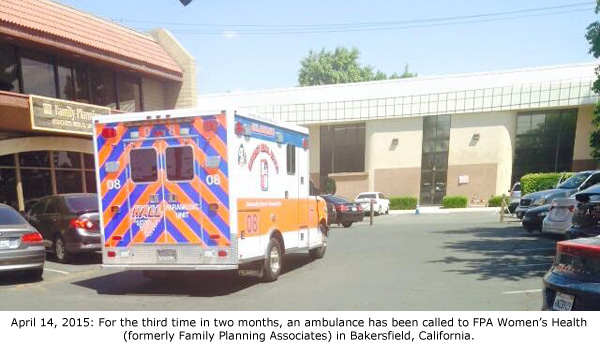 Other incidents took place on March 31 and February 3, when a woman suspected of having suffered a heart attack during an abortion procedure was rushed away by ambulance. Overall, this is the eighth documented medical emergency at this facility since 2012.

Tim Palmquist of Life Savers Ministries told Operation Rescue that people who have been inside the abortion facility have complained about conditions inside. One man, who recently escorted a woman for an abortion complained to Palmquist that the clinic was “very dirty inside, specifically mentioning q-tips on the floor and that they obviously hadn’t even vacuumed.”

Mann has a history of providing substandard patient care. She was sued in 2011 for a gruesomely botched circumcision that left a child permanently disfigured and has required several surgeries. The suit alleges that Mann “was negligent and her conduct fell below the care and skill required of medical doctors and medical practitioners.”

“It is our opinion that Mann poses an immediate danger to the public and has created a safety crisis in Bakersfield. Today, we are asking the California Medical Board for an emergency suspension of her medical license in order to protect the public while a full investigation into her abortion practices and conditions is done,” said Troy Newman, President of Operation Rescue. “We will continue to investigate this on our end due to serious concerns that the patient may not have survived.”