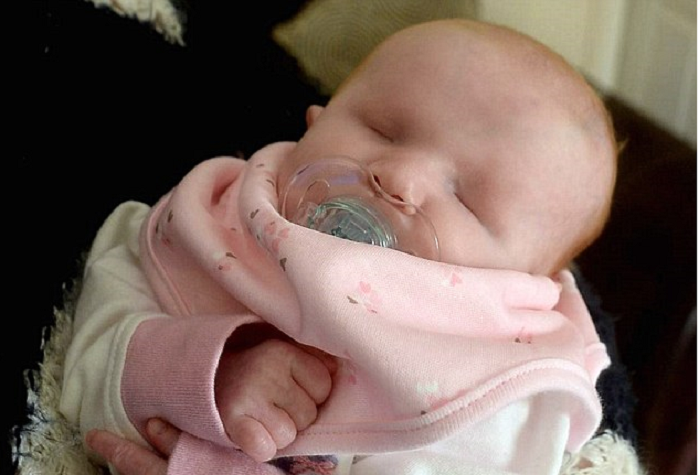 After a routine ultrasound scan showed mother Danielle Davis that her unborn baby Daisy had a cyst on her brain, doctors encouraged her to have an abortion. Thankfully she chose life and refused to take her baby’s life over a possible disability.

When Daisy was born, she was born with a condition known as Anopthalmia, meaning a lack of eyes. She will never be able to see and may eventually be fitted with cosmetic glass eyes.

Despite her condition and physical appearance, Danielle says her daughter is “gorgeous.” The London Daily Mail has more on this brave mother and her beautiful little girl.

Ms Davis, a care worker from Cwmbran, South Wales, said: ‘It was a shock – we had never heard of it before and neither had any of our friends or family.

‘People didn’t really know what to say when we told them.

‘But she is our gorgeous baby and we have no regrets about turning down a termination.

‘We want to give Daisy as normal a life as possible and give her the same opportunities as other children.’

Anophthalmia is a rare disease in which a baby is born with no eyes. It develops during pregnancy, and affects around one in 10,000 births in the UK. There is sadly no cure.

Davis said: ‘The cyst showed up on the 21-week scan and naturally, we were worried about it. But none of the doctors said our baby could be born blind.

Read more about Patrick and the beautiful music he plays on the piano.