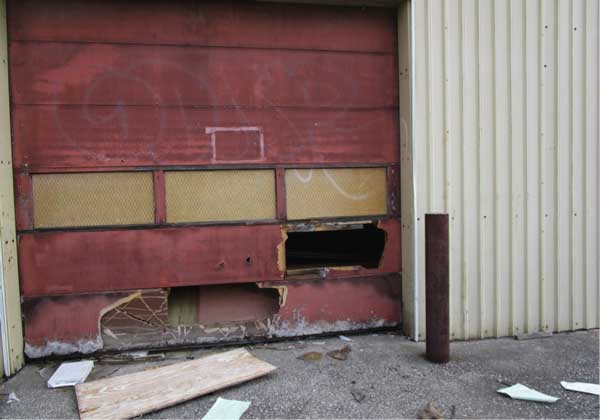 A Michigan abortionist left thousands of medical records, many of them documents of women who had abortions, at an abandoned abortion clinic in Michigan. The incident belies the claims from abortion activists that they value a “right to privacy.”

Mills, concerned that the privacy rights of women were seriously at risk, returned to the unkempt and dilapidated building later on March 15th with Monica Migliorino Miller, director of Citizens for a Pro-Life Society to investigate further and document evidence to take to the Flint police.  Together they discovered that a large gaping hole was cut into the garage door in the back of the building large enough for a grown man to easily gain entry to the facility. In addition to the unlocked side door, the huge hole in the garage door, the former clinic may also be entered through a hole on the right side of the building.

All of the boxes of medical records could be seen through the garage door hole and were perfectly accessible through this breach in security. Mills and Miller immediately notified the local Flint police department, but were told that no officer would be able to respond to a call to the building and they were advised to file a police report online.

On March 23rd and March 24th Mills and Miller returned to Flint and met with an officer of the Genesee County Sheriff and were told to follow up with the Flint Police Department. Mills and Miller also attempted to meet with an attorney at the Genesee County Prosecuting Attorney’s Office to discuss possible criminal violations to which Abraham Alberto Hodari may be subject regarding the improper retention of medical records and improper disposal of medical waste.   Michigan State Law 333.16213 and 333.20175 governs the proper retention of medical records and states:  “Records shall be maintained in such a manner to ensure their confidentiality and proper use and to ensure their accessibility and availability to each patient or his or her authorized representative.”  Michigan Public Health Code  333.13811governs the proper disposal of medical waste including medical sharps.

Upon returning to the Feminine Health Care building they discovered that the stacks of boxes from Hodari’s Michigan clinics were now gone—they had been mysteriously removed.  Nonetheless, hundreds of other sensitive medical records remain in the neglected and unsecured building as
well as the dangerous piles of sharps.

The Flint Police department assured Mills and Miller that a detective would be sent to Feminine Heath Center to investigate the possible violations of Michigan State Law. Mills and Miller plan to take their documented evidence to the Michigan Attorney General and urge that Abraham Alberto Hodari be held responsible for dereliction in his responsibility to ensure the security of the medical records from his practice of abortion.

Lynn Mills of Pro-Life Detroit states: “This isn’t the first time medical records and patient files have been found, but it should be the last.  Patients have the expectation of privacy when they go to any doctor, even an abortion doctor.  Where is the government oversight on this and why are their laws not being enforced?  The number one responsibility of the government is the protection of its citizens.  These woman were victimized in their abortion and again now because of this careless record keeping.”

Monica Migliorino Miller of Citizens for a Pro-Life Society states: “Anyone looking at the sorry condition of Hodari’s Flint abortion facility can see immediately that this building has been sorely neglected. This abortionist allowed his former clinic to degrade to such an extent that anyone could easily go in and out of that building while stacks and piles of medical records of women who have had abortions are exposed and accessible. This is truly an outrage. Hodari is responsible for the proper maintenance and security of that building, especially since he decided to use it as storage of medical files! The sign on the property is still there and says “Dedicated to Upholding the Dignity of Women.”  The dignity of women cannot be
upheld if their private medical records are left vulnerable to any vagrant going in and out of that abandoned building.”

The decades-long abortion practice of Abraham Alberto Hodari has seen its share of conflict and controversy.  Dozens of civil suits have been filed against Hodari and his Woman Care clinics due to botched abortions, at least three women have died due to complications from abortions performed in his Michigan clinics, including the death of Regina Johnson for which the State of Michigan ordered Hodari to pay a $10,000 fine for medical negligence.  In 2009 Caitlin Bruce sued Hodari and the Flint abortion facility for failing to stop the abortion procedure when she indicated that she had changed her mind—and was forcibly held down by a woman assisting Hodari in the abortion. It is believed that Hodari resolved that case by agreeing to pay Bruce an out of court settlement.  In 2008 members of Citizens for a Pro-Life Society discovered the remains of aborted babies in Hodari’s Lathrup Village, Michigan Woman Care clinic, as well as over 200 intact patient records and biohazard waste that prompted a formal investigation by the Michigan Department of Environmental Quality that cited him for violating Michigan law and charges filed against him by the Oakland County prosecutor for improper maintenance of patient records to which he pled “no-contest”  and was placed on a six months
probation. 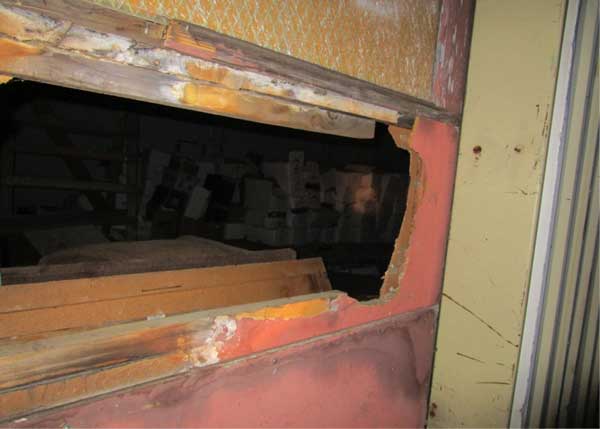 A mountain of medical records from Abraham Alberto Hodari’s Michigan abortion clinics accessible
through hole in garage door of the Feminine Health Care Clinic in Flint, MI.   Photo by CPLS. 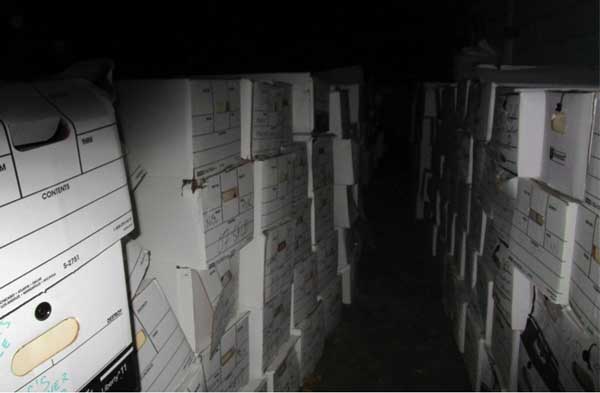 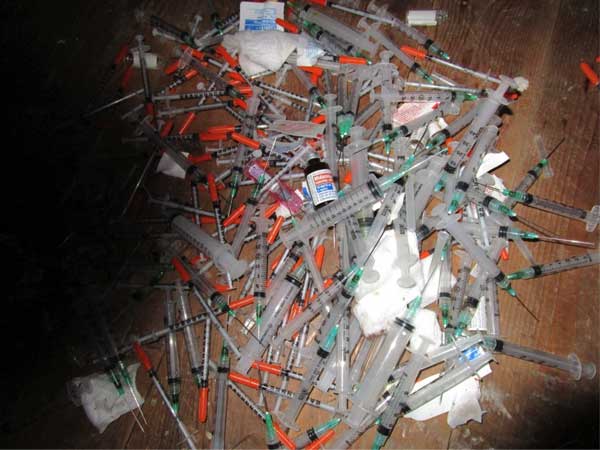 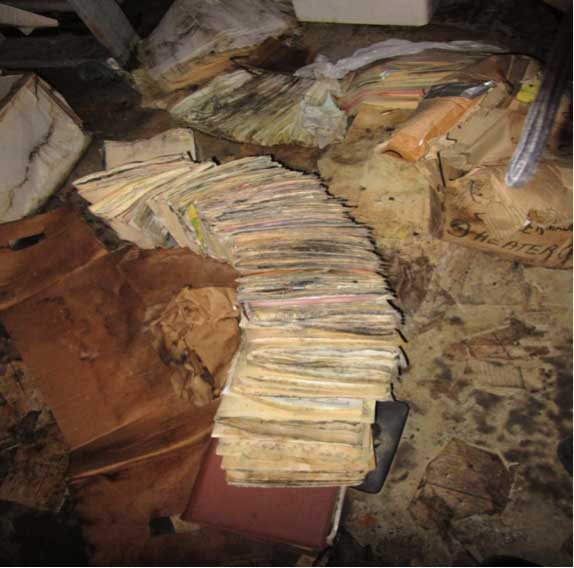 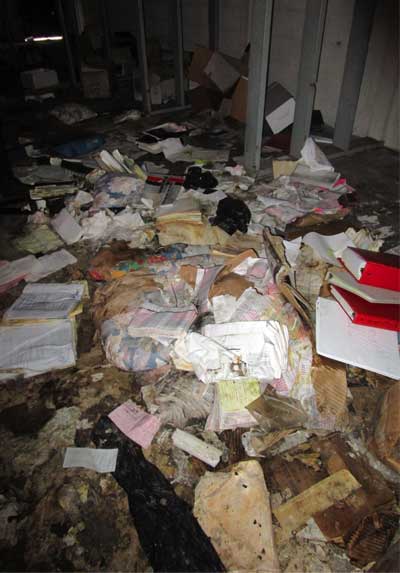 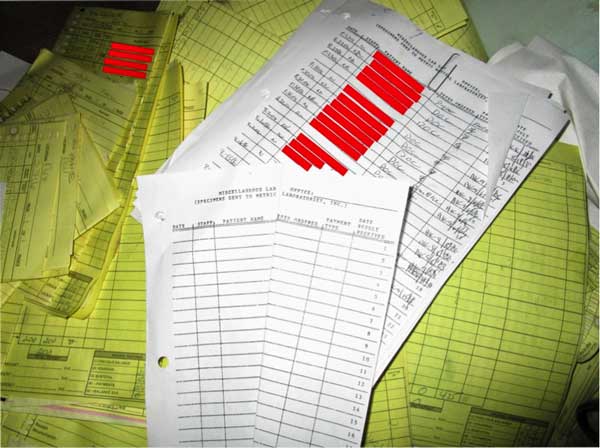 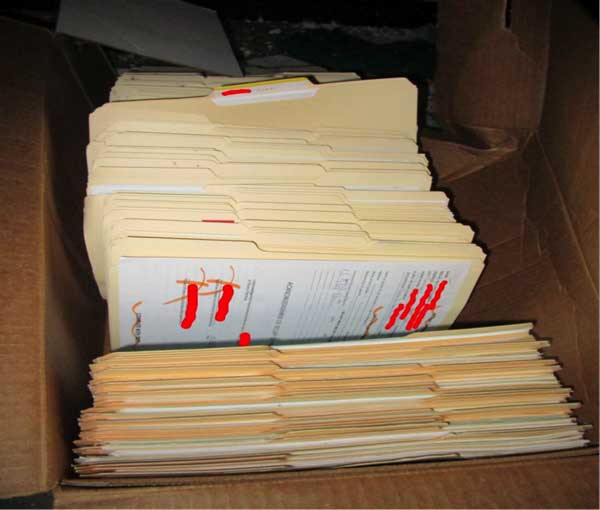 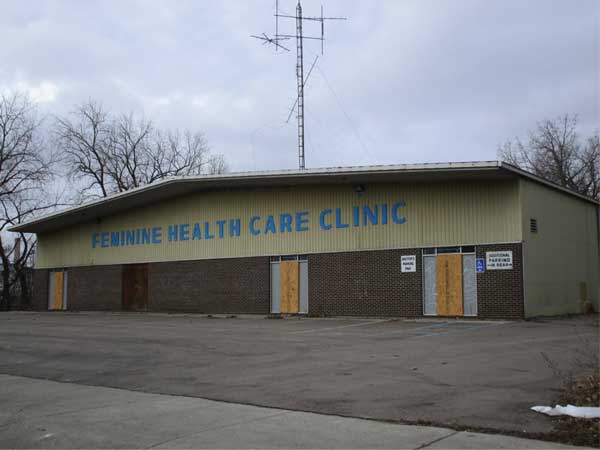