Some consider him the worst abortionist in America. That reputation was only enhanced on Saturday, March 7, 2015, when sidewalk counselor Michele Herzog of Pro-Life Action Ministries filmed James Scott Pendergraft IV sneaking in the back door of EPOC in Orlando, one of five abortion clinics owned by him.

The problem? Pendergraft’s Florida medical license is listed as “delinquent.” According the Florida Medical Quality Assurance Services, that means, “The licensed practitioner is not authorized to practice in the state of Florida.”

In addition, Pendergraft is not authorized to administer controlled substances, such as sedation.

Herzog had stopped to pray at the facility around 11:00 a.m. when she noticed Pendergraft pulling up in his well-known gold-colored van. Herzog reports that Pendergraft noticed her sitting in her own vehicle and waited 10 minutes in his car before finally pulling up his gray hoodie and rushing into the clinic.

That is when Herzog caught him on tape. 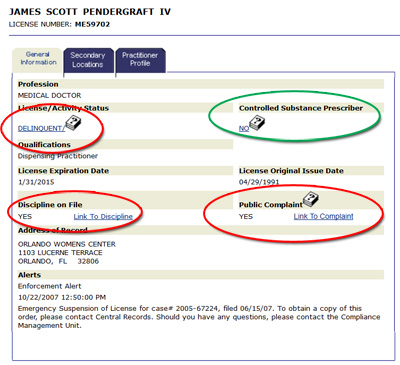 Herzog noted that there were several women who had already gone into the facility. Conversations with some of the couples confirmed the women indeed had abortion appointments at the Pendergraft-owned facility. No other abortionist was present.

Herzog contacted Operation Rescue, which advised her to call the police and the media since it is a crime to practice medicine without a valid medical license. When two police officers responded, they refused to even ask questions.

Herzog had the documentation on her smart phone just waiting to show the police that proved Pendergraft was not allowed to practice medicine. “They wouldn’t even look at it,” she said.

After the police left, Herzog began calling media outlets in the Orlando area to notify them that the notorious abortionist, who has had his medical license suspended five times, was again flouting the law and endangering women.

“Once I called the news, I am sure some of them must have called the clinic,” said Herzog. “Very shortly after, Pendergraft came out the back door and ran and jumped in his van and pulled out.”

With Pendergraft gone, a man accompanying one of the abortion customers came out of the clinic and expressed to a sidewalk counselor frustration that, “now this is going to take forever.”

“It’s disturbing that police were willing to endanger the lives of women by ignoring the complaint that Pendergraft was practicing medicine without a license,” said Operation Rescue President Troy Newman. “I’m sure if these same officers had caught him driving his car without a license, they would not have refused to act. This was so much worse.”

A case in point is a 2011 malpractice case where Pendergraft was hit with a with a whopping civil medical malpractice judgment of $36,737,660.16. That case involved a botched 20-week abortion that resulted in the live birth of a child physically damaged by Pendergraft’s incompetent abortion process amid what was described as “third world conditions” where the woman was given virtually no counseling.

Saturday’s incident was not the first time Pendergraft has been caught attempting to practice medicine without a valid medical license.

A six-month investigation conducted by Operation Rescue in 2012 uncovered evidence that Pendergraft was working illegally in Maryland — where held no license — in conjunction with abortionist Harold O. Alexander. The pair offered late-second and third trimester abortions at a “secret” facility that was actually Alexander’s run-down Forestville abortion clinic.

At the Maryland facility, Pendergraft offered “Intercardiac Injection,” which is a lethal injection into the baby’s heart that is made with a long spinal needle through the wall of the woman’s abdomen. This injection is meant to kill the pre-born baby. But Pendergraft admitted that he would not be finishing the abortions — shockingly for purposes of making a political statement.

“Once the fetal heart beat has stopped, the process of removing the fetus from the mother’s womb is no longer defined as an abortion,” stated Pendergraft. He offered this as a way to force hospitals and physicians that otherwise may balk at abortion to finish the abortion process since the woman now faces a serious life-threatening condition.

Herzog has now filed a medical board complaint of her own against Pendergraft in Florida, hoping that after five license suspensions, Florida will finally revoke his medical license for good and shut down his chain of seedy abortion clinics.

It is possible that her quick actions that caused Pendergraft to flee the scene actually saved the women awaiting abortions from serious harm.

“Pendergraft has so little respect for the law that he simply cannot be trusted. Since traditional discipline has not had the desired effect on him, it may be that the only way to protect women is to send him to jail. We call on Florida Attorney General Pam Bondi to initiate an investigation and prosecution of Pendergraft before more women are injured or killed,” said Newman.