Born at 24 weeks gestation, Lily Forsyth weighed just 1lb 8oz – less than a bag of sugar. Lily almost did not survive because at 20 weeks doctors suggested abortion but her mother refused.

“Lily was living without the waters and it was just so  horrible,” she told Ediburgh News. “The doctors scanned her and they said she wasn’t going to make it and I would miscarry.”

At 20-weeks, Jodie says doctors suggested that she have an abortion as it fell within the 24-week legal limit in the UK. 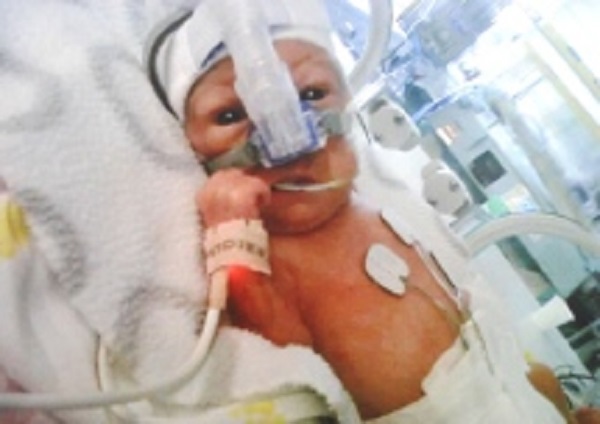 Born on July 31 only 24 weeks into her mother’s pregnancy and weighing just 1lb 8oz – less than a bag of sugar – Lily Forsyth’s tiny fingers were barely able to clutch her mother’s hand.

She was so poorly that Jodie started to plan her own daughter’s funeral after doctors told her to prepare for the worst.

That was six months ago – and after 174 dark days in hospital, beautiful Lily is now home in Mayfield, Dalkeith, with her mum, dad Mark Forsyth, 23, and two-year-old sister, Chantelle.

Jodie fought back tears as she remembered being told by doctors after an hour-and-a-half in labour that Lily was too weak and that if her condition did not improve within 12 hours, then her life support machine would have to be switched off.

The 21-year-old said: “I nearly lost her a number of times, but she’s fought very, very hard for her little precious life.

“It was a really bad start in life and I am just so proud of her.”