Leaders of national and local pro-life groups gathered in historic Selma, Alabama, on February 11, 2015, to call for a full investigation into an abortion facility, Central Alabama Women’s Clinic, that is believed to be operating illegally. 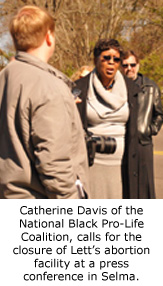 During the press conference, Fr. Terry Gensemer, director of the CEC for Life, reported that at one point the receptionist at the abortion clinic shouted at a WorldNetDaily.com reporter, “We don’t do abortions.”

In Alabama, the law requires medical facilities that do more than nine abortions per month to be licensed as an abortion facility, but evidence shows the unlicensed Central Alabama Women’s Clinic, operated by Samuel G. Lett, is exceeding that number.

CEC for Life, Life Legal Defense Foundation and Operation Rescue conducted an investigation into tips that abortionist Lett was operating an illegal and unlicensed abortion facility in Selma. The groups recorded multiple telephone conversations with Central Alabama Women’s Clinic workers who were more than willing to schedule appointments for abortions for the callers, who posed as potential abortion customers.

“Our people never had any problem making abortion appointments at Lett’s facility. We were never turned down,” said Troy Newman, President of Operation Rescue. “This abortion business is operating in violation of Alabama law and outside any oversight. That makes this a dangerous place for women. Lett can cut any corners he wants and no one will be the wiser. That makes him dangerous, and we call on the Alabama Department of Health to shut him down immediately.”

The first calls placed on July 14, 2014, left no doubt that abortions were done as a matter of routine at Lett’s clinic. The following exchange was typical of the numerous calls placed by staff of Operation Rescue and CEC for Life.

Caller: Hello, I was wondering, do you do abortions there?

Clinic Worker: It’s depending on how far along are you.

Caller: Yeah, well, my last period was in May.

Subsequent calls reflected similar results, with several urging women to come in for their consultation appointment the next day so the abotion could be done the day after that.

Most recently, a call placed on February 2, 2015, confirmed that abortions were still business as usual at the Central Alabama Women’s Clinic.

Caller: Hi, um, I was wondering, when would be the soonest I could get an appointment for an abortion?

Clinic Worker: Um, I am not sure. You would have to come in and do a consultation with the doctor and he can talk to you about that. What day would you like to come in?

Caller: How about tomorrow?

Caller: So what kind of abortions do you do there and how much do they cost? I’m just trying to figure out if I can afford this.

“We began in July of last year to give evidence to the Alabama Department of Public Health about what was going on at this clinic,” said Fr. Terry Gensemer, Director of the CEC For Life. “We have asked them on several occasions to move forward with their investigation, and they have really dragged their feet.”

A letter of complaint that included documentation was sent to Brian Hale, Deputy General Counsel of the Alabama Department of Public Health in July 2014, by Life Legal Defense Foundation’s Senior Staff Counsel, Allison Aranda, who is representing CEC for Life and Operation Rescue. In response to follow-up queries, the Alabama Department of Health has responded only that an investigation was “pending.”

Aranda sent a second letter to Mr. Hale on February 3, 2015, expressing disappointment that no action had been taken in the eight months that had elapsed since the issue was first brought to his attention. Aranda also notified Hale of Wednesday’s planned press conference.

In response, Hale told reporters last week, “We are aware of the allegations that Life Legal Defense Foundation and others are [making] and have made in regard to the Central Alabama Women’s Clinic. We have been participating in an investigation of those allegations.” 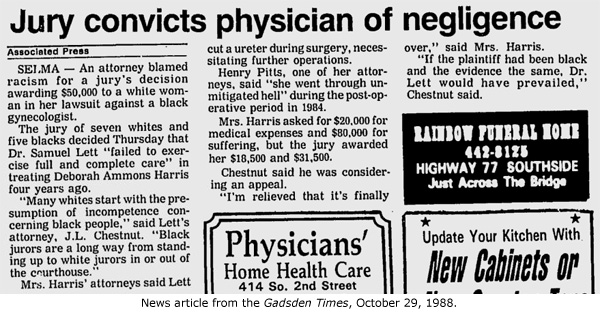 Samuel Lett has run afoul of the authorities in the past. In 1984, Lett “failed to exercise full and complete care” in surgically treating Deborah Harris. After Harris won a $50,000 malpractice judgment against Lett, her attorney told the Associated Press that “she went through unmitigated hell” after Lett operated on her.

However, instead of taking responsibility for his actions, Lett blamed the loss of Harris’ malpractice suit on “racism.”

In 2003, Lett and his brother, Charles, also denied any wrongdoing despite the fact that they had just lost a lawsuit filed by the State of Alabama, which was left holding the bag after the Lett brothers defaulted on a $2.2 million U.S. Department of Housing and Urban Development loan. The Letts stuck Alabama taxpayers with a whopping $4.4 million bill, which included principle and interest on their defaulted loan over time.

“Lett’s troubled background makes us wonder if financial difficulties drove him into the abortion business where he could make a fast buck by exploiting poor urban women of color,” said Newman. “At $550 a pop, it doesn’t take long for a corners-cutting abortion business to make big money.”

Despite the evidence submitted to the Alabama Department of Health the Central Alabama Women’s Clinic remains open. However, the receptionist is now hesitant to admit that abortions are taking place there, according to a call placed on Friday, February 13, 2015. A partial transcript of that call indicates he may still be in the abortion business:

Caller: I was wondering, when would be the soonest I could get an appointment for an abortion?

Clinic worker: Um, you can make an appointment and talk to the doctor.

“It’s clear that even after being exposed publicly as an illegal abortion provider, the Central Alabama Women’s Clinic could still be breaking the law. It is time for the Alabama authorities to take action to protect women from Letts’ unscrupulous and illegal back-alley abortion business,” said Newman.

Please take time to contact the following and demand that the state do its duty to protect the public by shutting down Samuel Lett’s unlicensed and illegal Central Alabama Women’s Clinic abortion facility.

NOTE: The following pro-life organizations are supporting this effort: