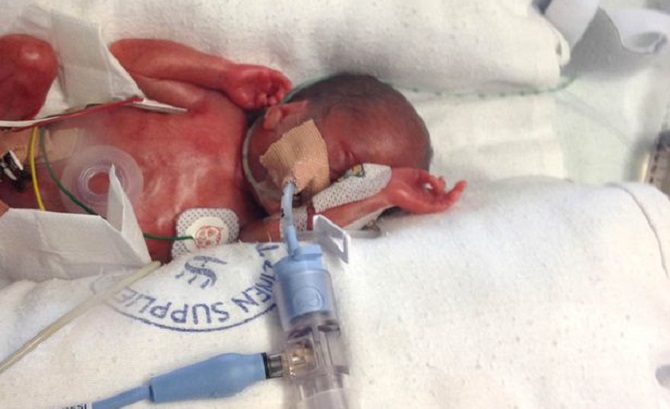 Little Amy Elliot was born at 24 weeks – almost four months before her due date of September 21 and 87 days before her twin sister.

Waterford, Ireland mother Maria Jones-Elliot was pregnant with twins when her water broke at 23 weeks and five days into her pregnancy.

“I started feeling unwell at work and I felt extreme pressure on my abdomen but I thought that must be normal as I was having twins. But I was worried enough to get an appointment at my GP who told me to go straight to hospital and get it checked out.

“To my horror when I got there just hours later, my waters broke. I was immediately admitted,” she told the UK Daily mail.

Maria was told that she was going into labor and could lose both her unborn babies.

Dr. Sam Coulter Smith, chief of Dublin’s Rotunda Hospital and an expert in obstetrics and gynecology called the birth astonishing.

“For a baby delivered at 23 weeks to survive, is a huge achievement from everyone’s point of view,” he told the Irish Times. “For a 23-week twin to survive is even bigger because twins often behave more prematurely than singleton babies. That really is right at the absolute border of viability.”

Once Maria had given birth to Amy, her contractions stopped and despite efforts to induce her the following day, Katie remained in the womb.

“She was still so tiny I could barely feel her lying on my chest. She loved it.

“Her heartbeat stabilized as I held her. I was so emotional I couldn’t even speak. I kissed her head and held her.

“Her little feet rested on the top of my bump. I remember stroking my bump at the same time, hoping for a miracle.

“Katie immediately reacted. She kicked and started moving, as if she knew. The second time I held Amy the following day she turned and put her head towards her sister inside the womb,” the twins mother said. In 2013, their incredible births were recognized by the Guinness World Record for the “longest interval between the births of twins.” The previous record is 84 days.