The red light flashed with urgency on my office telephone, but I hardly gave the routine voicemail indicator a second thought – that is, until I pressed the replay button. What I heard next was a day-changer, and I knew I couldn’t rest until I did something about it. 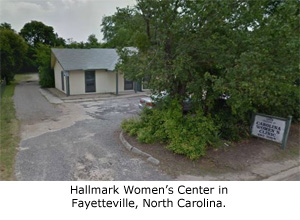 “I’m calling because I recently got an abortion at the Hallmark Clinic in Fayetteville, North Carolina (right), and it was one of the worst experiences I’ve ever had in my life.”

Her emotion-laden voice proceeded to detail her experience that seemed straight from a horror novel.

I called her back and received permission to file complaints with the North Carolina Medical Board and the Department of Health and Human Services. This week, I received confirmation that both agencies are handing the cases over to investigators, which is an encouraging first step.

But what actually happened to our caller (we are withholding her name) that made her experience so traumatic?

Last fall, she made an appointment for an abortion, but when she got to the Hallmark Women’s Center she saw that the clinic was filthy. She was told to use poorly-maintained restroom, but the door uncomfortably had no privacy lock.

Once she was in the procedure room, she was administered “laughing gas” and left alone. She had to hold the gas mask over her own mouth because it had no strap or any way to attach it to her head.

Once she began to relax, her arm dropped, the mask fell off her face, and the effects of the gas began to wear off.

She had to wait longer than she thought was right for abortionist Malana Moshesh to come in and begin her abortion procedure.

By then, the gas had worn off completely. Moshesh continued on with the abortion despite the fact that the woman had no pain relief whatsoever.

When the agony became unbearable, she began to scream.

Moshesh told her to be quiet and to cover her mouth with her hand so the other women waiting wouldn’t hear her. She felt she had no choice but to comply.

At no time did Moshesh administer any additional gas or other drugs to give her relief during her abortion, which caused her excruciating pain throughout. It was as if she was enduring some sadistic form of torture.

After the abortion, Moshesh left her alone in the room again. She had asked not to see the ultrasound of her baby, but the monitor was left facing her with the image of her child still frozen on the screen. That is when, to her horror, she saw the “bowl” filled with blood and the dismembered remains of her now-aborted baby.

It was the stuff of nightmares, and it upset her terribly.

After the abortion, she was given ibuprofen, which was more relief than she got during the surgery.

Embarrassingly, she had no choice but to awkwardly hold her sanitary pad in place with her hand as she waddled into a bathroom. She accidentally dropped the bloody pad into the toilet, and one of the clinic workers became angry with her. She felt humiliated when she was handed a glove and ordered to remove it from the toilet herself.

She made an appointment for a follow-up visit at the Hallmark Women’s Clinic despite her desire to run and never look back. She had been told at the clinic not to visit her own doctor or go anywhere else for medical care.

She continued to suffer pain after the abortion. A week after the surgery, she was frightened when woke up in a pool of blood.

She told me she wanted to go see her personal doctor, but feared that would only make things worse because of the warning she was given at the clinic not to see anyone else. I urgently advised her to make an appointment and visit her regular doctor as soon as possible and have him examine her thoroughly.

She continues to deal with the trauma of her ordeal and said she cried every day since the abortion that she now so deeply regrets. Doing normal day-to-day activities has become difficult.

“I don’t know how to do that anymore,” she told me, referring to simple tasks routine task such as getting up, getting dressed, and eating meals.

When the letters from the medical board and health department arrived, indicating that full investigations into Moshesh’s appalling behavior and the clinic’s squalid conditions were underway, it raised my hopes that soon women will be protected from this North Carolina version of a “house of horrors.”

However, I am also aware that such investigations can take months, and in the meantime women just like our new friend are suffering from the same abominable treatment at a substandard facility that would not pass inspection as a dog kennel.

Her experience is one that is all too common at abortion clinics today. Subjecting women to surgical abortions without anesthesia is a barbaric practice that only ensures that the emotional wounds of abortion will heal slowly, if at all. It’s hard to imagine the heartless soul that could inflict that kind of torment upon a fellow human being, while day after day, earning her living by dismembering babies.

Until the results of the investigations are complete, I can tell her story as a warning to others, hoping and praying that the next red flashing light on my desk phone is the Department of Health telling me that Hallmark Women’s Center has been permanently closed.