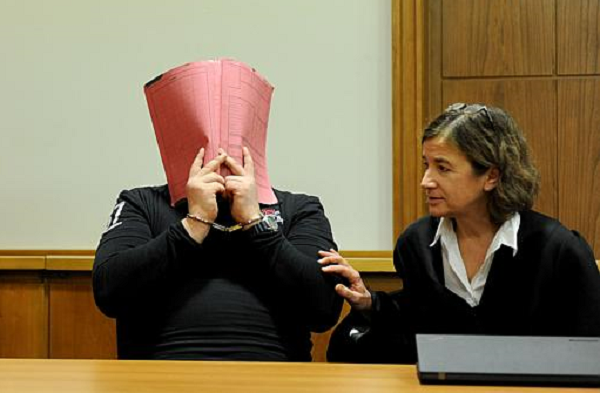 A German male nurse, known as Niels H., said that he killed at least 30 patients between 2003 and 2005 because he was bored.

Niels (below right with face covered) admitted to a psychiatrist that he injected seriously ill patients with a does of dangerous medicine at two clinics where he worked as an emergency rescue worker. The medicine could cause the heart to function irregularly and blood pressure to drop; and according to prosecutors, if Niels H. succeeded in reviving a patient, he would sometimes try to medicate them again for a second attempt. They also believe he could have killed up to 100 patients during his time of employment.

Tragically, the death rate nearly doubled during the time Niels H. worked at these clinics and the deaths of 174 patients during his shift are under investigation.

This case is eerily similar to Daniela Poggiali, the Italian nurse, who killed up to 100 patients because she found them or their relatives annoying. One of her victims, Rosa Calderoni, brought her crimes to light after she died from an injection of potassium. Officials suspect that Ms. Poggiali may have killed two more patients on the same day of Calderoni’s death.

A 38-year-old German male nurse, identified only as Niels H., admitted to killing at least 30 patients between 2003 and 2005, Sky News reported.

The man has been on trial in an Oldenburg court since September for the murders of three patients. Prosecutors believed he could have killed over 100 people during the time he worked at two clinics and other hospitals as an emergency rescue worker.

The former nurse has now admitted that he killed at least 30 patients in his care, a court-appointed psychiatrist said Thursday.

According to the expert, Niels H. admitted to injecting seriously ill patients with an overdose of a potentially dangerous medicine so that he could resuscitate them.

Niels H. reportedly told police after he was arrested that he killed the patients because “he was bored.”

Prosecutors also said that he wanted to practice his “excellent” resuscitation skills, Deutsche Welle, a German broadcaster, reported in November.

The former nurse was previously sentenced to seven and a half years in prison in 2008 for the attempted murder of another patient. Sixty others have survived his attacks, Sky News reported.

As LifeNews previously reported, in 2012, the Parliamentary Assemble of the Council of Europe adopted a resolution that stated its opposition against euthanasia. The resolution read as follows: “Euthanasia, in the sense of the intentional killing by act or omission of a dependent human being for his or her alleged benefit, must always be prohibited.”

The purpose of the resolution entitled “Protecting human rights and dignity by taking into account previously expressed wishes of patients” is to define the principles that should govern the practice of “living wills” or “advance directives” in Europe.

Additionally, in 2014 Germany’s Health Minister, Hermann Groehe, said he opposed physician-assisted suicide. Rather than promote the evil practice, he said Germany should work to expand its network of hospices, so everyone has access to palliative care and the best painkillers while dying.